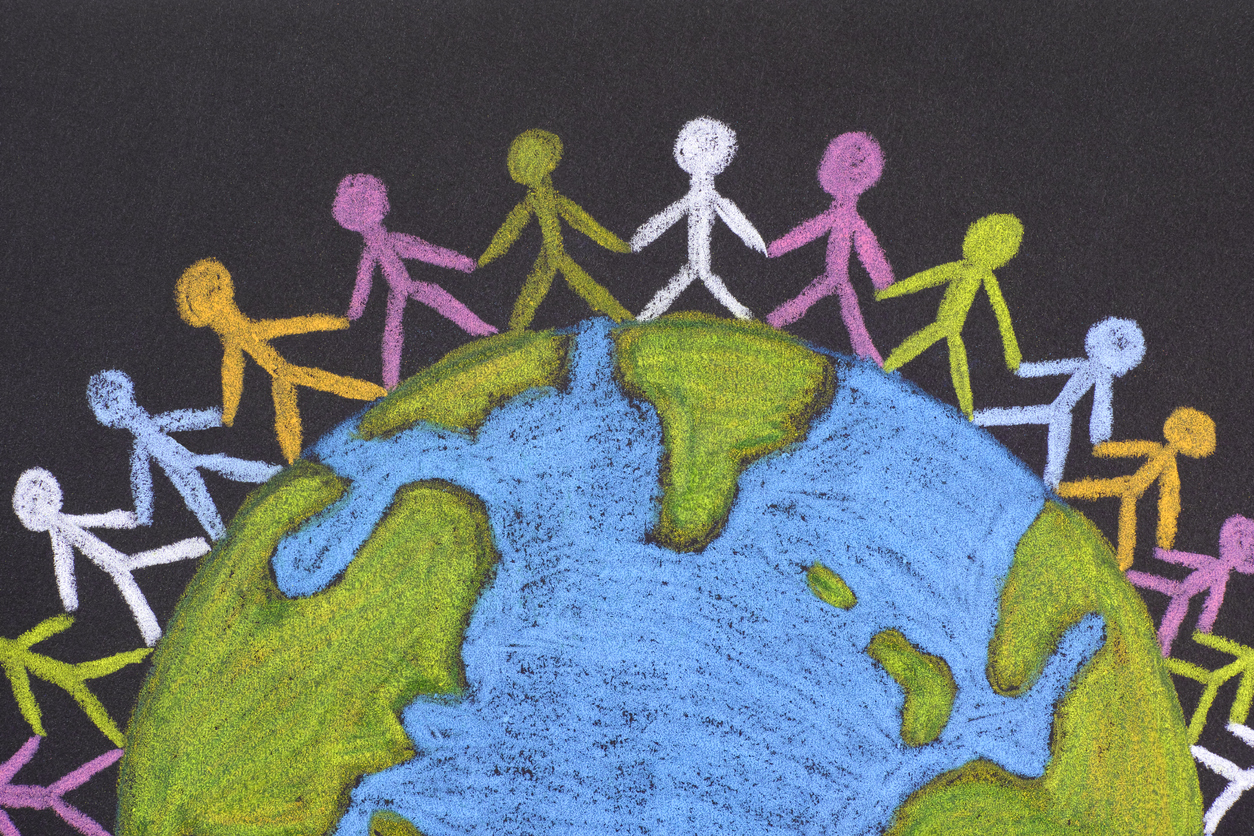 Environmentalism has become a taboo subject, used as a political bargaining chip that alienates people from both sides of the aisle. At the same time, people in general seem to be further and further removed from the natural world, disconnected from it in an extreme way. This essay seeks to address our relationship with the natural world, as explained through Midrashic sources, as well as works from the Alter Rebbe and the Frierdiker Rebbe.

Earlier this year the world watched as fires ravaged Australia, leaving thousands of people homeless and millions of animals dead. Images spread across the globe of koalas begging for water, of homes reduced to ash. The blue summer skies were replaced with a thick, smokey grey. We watched in horror as people and animals died, as homes burned to the ground, as the nation rallied together to provide clothing, food and housing to those who had lost everything. And all the while, I found myself growing increasingly frustrated with how the Australian government and media were handling it all. Like most things to do with the disasters like this one, the ongoing tragedy turned into a partisan fight about climate change and environmentalism.

The longer this went on, the more apathetic I felt. How am I supposed to care about something as gigantic and overwhelming as ‘The World’? I don’t understand the zealotry of my friends who take care to recycle every single thing they can. I’ve never been interested in nature, no matter how much I wanted to be. How could I connect to the world around me? How do I care about it? The truth is, sooner or later you realise that almost anything can be answered by turning to Chassidus. And more than that, turning to the wisdom of Lubavitch can help us understand the relationship we already have with the world, even if we don’t realise it yet.

One of the most fascinating things about Torah and mitzvos is the emphasis that gets placed on our physical environments. The mitzvos we talk about on a regular basis, the ones we make sure to observe, they all concern The Individual — we keep Kosher, we daven regularly, we take care of our own physical and spiritual needs. But there is also a consciousness of our surroundings that is imbued in Torah law. The rules of Bal Tashchis(1) tell us not to cut down our enemies’ fruit trees during war time, which is then expounded on by the Rabbis to include other forms of unnecessary destruction or waste. Leket and Pe’ah are laws that govern how we manage our fields to ensure we can give to the needy, and Shmita gives the land time to recover and rest every seven years. Time and time again, we are told that we must treat our land in a certain way, that we must utilise it in specific ways so it can give back to us.

If you go back to the first ever human being, Adam HaRishon, we see our responsibility for the world laid out clearly. In Bereishis 1:28, Hashem states: “fill the earth and subdue it, and rule over the fish of the sea and over the fowl of the sky and over all the beasts that tread upon the earth.(2)” The sages go on to teach us that the guardianship humanity has over the natural world is conditional, and reliant upon our treatment of it. Midrash Koheles Rabba teaches that when Hashem showed Adam the world He created, He said: “See my works, how fine and excellent they are! All that I have created, for you have I created them. Think upon this and do not corrupt and destroy My world, For if you do, there is no one to set it right after you.”(3)

What a lovely thought — this world is created just for us! We farm it and it sustains us, we raise cattle and it feeds us. But in return, we have a responsibility: we mustn’t corrupt, nor destroy it, for we are the end of the line. This is usually interpreted to mean that we must sustain the world through mitzvos; that without observing Torah and mitzvos, the world falls into spiritual disarray. But perhaps we should also let it encompass physical destruction as well. We aren’t allowed to cut down our enemies’ fruit trees – a physical act of mercy. We must leave the corners of our fields for the poor – a physical act of generosity. We leave our fields every seventh year – a Shabbos for the land. These mitzvos combine the physical needs of the land with the spiritual effects it has on the people who perform it. Furthermore, we should take a look at some of the brachos we say for the natural world. We thank Hashem for lovely fragrances, for hearing thunder, and for witnessing natural phenomena (shooting stars, comets, earthquakes, volcanos, tornados, hurricane, lightning bolt, ocean or majestic mountains.(4)) All of these blessings remind us not only of the wondrous world Hashem provides us with, but of its miraculous beauty and design. These are further reminders that whilst we cannot let the world become spiritually corrupt, we must also fight its physical destruction. The world was made for us, but we must care for it and keep it alive.

But beyond understanding why we should care for the environment, there’s still the question of how. How do we care about something with which we don’t naturally connect? Maybe it’s a classic example of ‘fake it ‘til you make it.’ Or maybe you could argue that we don’t have to care about or connect with nature in order to protect it. But I think maybe there are other answers to be found.

One of the fundamental concepts of Chassidus is the idea of the ‘Divine Spark’, the elements of Hashem in the world around us. Everything in the physical world contains a divine spark, a bit of Hashem, that allows it to exist. Sure, we know that humans have Neshamas, and animals have an animalistic soul too. But the Divine Spark exists in everything, and that includes vegetation and inanimate objects. The Alter Rebbe explains this phenomenon in his formative work, the Tanya:

“He [Hashem] gives it [the physical world] existence and animates it by the vitality and light which He causes to flow and shine forth unto it— a light that is clothed, hidden and concealed within the numerous and powerful garments, which hide and screen the light and vitality, so that no light or vitality whatever is visibly revealed, but only corporeal and physical things that appear lifeless. Yet they contain light and vitality which constantly give them existence ex nihilo, that they shall not revert and become nothing and nought as they had been.”(5)

Whilst the English translation may be hard to parse, if we take the time to understand it we can learn something very profound. The creation of the physical world is made up of what modern teachers call the ‘Divine Spark’. This spark is present in all things in the corporeal realm, though in some instances it is more hidden than others. For inanimate objects, the Divinity with which it was formed is deeply hidden within a lifeless being. For vegetation, perhaps we can recognise the Divine Spark a bit more easily if we observe how plants grow and thrive. Despite appearances, the Divine Spark is everywhere, and thus, Hashem exists in every aspect of being.(6)

The mitzvos we perform have the ability to elevate the Divine Sparks that exist in our realm; we have the potential to allow any object to fulfil its potential and achieve its G-dliness. But perhaps these mitzvos also exist to remind us of the kavod, the respect, we should have for the world around us. The Ba’al Shem Tov taught of perpetual creation – the idea that Hashem is constantly refueling the world He created all the way back in Bereishis. We are dependent upon Hashem providing this constant creation, otherwise the universe as we know it would be unable to exist. Now, as established earlier, our guardianship over this world — as humans — is dependent on our treatment of it. Suddenly, it makes so much more sense why our physical treatment of the world has spiritual effects!

Perhaps this is all best summarised in a story told by the Frierdiker Rebbe(7). As a young man, he walked through the fields with his father, the Rebbe Rashab. His father pointed out how the movement of the wheat and grass in the wind was proof of Hashem — it was G-dliness itself! As they entered the forest, The Frierdiker Rebbe absentmindedly tore a leaf off a tree as he walked by, playing with it in his hands, and ripping it up even further.

The Rebbe Rashab turned to him and taught him a lesson of the AriZal. “Not only is every leaf on a tree a creation invested with divine life… but also within each and every leaf there is a spark of a soul that has descended to earth to find its correction and fulfillment.” He reminded  the Frierdiker Rebbe of how people are always responsible for their actions, especially when one is awake and in control of one’s intellect and emotions.

He reprimanded him, saying, “how can one be so callous towards a creation of G-d? This leaf was created by the Almighty towards a specific purpose and is imbued with a divine life-force. It has a body, and it has its life. In what way is the ‘I’ of this leaf inferior to yours?”

The wisdom of the Rebbe Rashab echoes what we’ve been discussing. Our responsibility for the physical world is of paramount importance – down to the smallest leaf! – for it, like us, is a part of the Divine.

I’m not sure what practical steps we can take towards loving the natural world, or connecting with it. I could take the environmental route and talk about recycling and solar energy, or about using reusable products, or protesting deforestation, or any of the thousand things you’ve been told before. But perhaps it’s as simple as this:

Day after day, time and time again, we must remind ourselves that the world we live in is filled with Hashem’s glory. According to the Rebbe Rashab, nature is as deserving of respect as we are. It’s our responsibility to ensure its survival. After all, we find it easy to love Hashem, and to love ourselves and our fellow people. If we start seeing the natural world as an extension of The Holy One, Blessed is He, then surely love for it is bound to follow.

Caring about the environment and the world can be hard; oftentimes it feels uncontrollable, bleak, or worst of all, completely hopeless. It can be hard to watch as the news cycle covers stories of natural disasters and climate change, things that feel unsolvable on an individual level. But instead of looking away and ignoring it, we have to think: Blessed are you Hashem, Lord, King of the Universe, who re-enacts the work of creation! Whose power and might fill the world!

1 An interesting question — could the burning of fossil fuels such as coal and oil be considered Bal Tashchis, due to the availability of renewable energy? The Rebbe endorsed solar energy in a talk on 11 Nissan 5741 (1981)
https://www.chabad.org/therebbe/article_cdo/aid/4423433/jewish/Solar-Energy-and-the-Repair-of-the-Wor ld.htm

6 I guess Uncle Moishy was right — Hashem truly IS everywhere!

7 The Leaf, as translated by Yanki Tauber
(https://www.chabad.org/library/article_cdo/aid/67664/jewish/The-Leaf.htm)