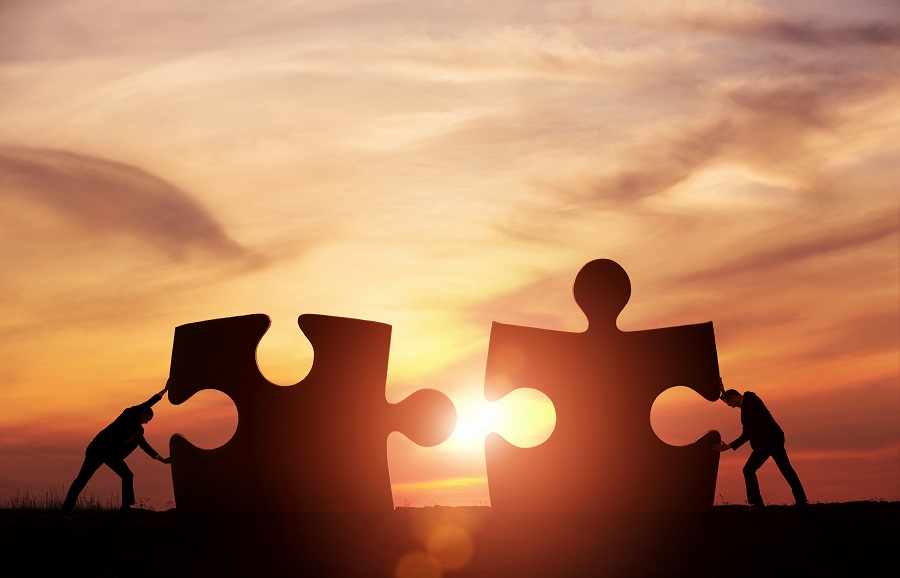 Would you like to deepen your connection with the special people in your life? Are you searching for love? Would you like to learn the secret that G-d himself employed when forming his relationship with us? The Lubavitcher Rebbe shared this great lesson with us in 1957 when he delivered the discourse Basi Ligani – Come Into My Garden1. There the Rebbe teaches us that in order to be mashpia – to reach out to one’s partner, one must practice bittul – the process of putting one’s ego to the side. Only after one has put himself on the side will he be able to see from the other’s perspective, and properly connect with them. We will explore how contemporary psychology and chassidus approach relationships, and learn a step-by-step method on how to apply these great lessons in our lives.

Part 1: Psychology’s Approach to Relationships
Psychologist Michael J. Formica once said, “True love is actually about the choice to put another person before our “self”2.” He writes about how the ego gets in the way of love, and that if you want to connect with someone, it cannot be for any ulterior motive. If your love is based on the premise that this person makes you happy, for example, as soon as you get upset at them, and you are no longer happy, there is no longer a reason to love this person. True love goes beyond how this person makes you feel. In order to achieve true love, you need to remove your ego and create space for your partner.

Family and marriage counselor Carin Goldstein once said, “Empathy is truly the heart of all relationships.” When two people want to form a connection, an integral ingredient is the ability to understand and feel what the other feels. Psychologist Paul Eckman divides empathy into two basic groups: cognitive and emotional3. Cognitive empathy, also called perspective taking, is where you can understand how someone else is feeling but you do not feel those emotions yourself. Emotional empathy – as the name implies – means that when you hear someone express how they are feeling, you in turn experience their emotions.

There have been multiple studies done correlating empathy with a strong relationship. These studies include relationships between romantic partners4, parents and children5, doctors and patients6, teachers and students7, and many more. All have concluded that when the giver in the relationship wants to connect to the receiver, the giver must put his emotions aside and feel empathy towards the receiver.

How does one feel empathy towards another? Through vulnerability. Renowned research professor Brené Brown once said after studying relationship dynamics, “When we lose our vulnerability, we move away from empathy.”8 Only by making yourself completely vulnerable to another, will you be able to feel true empathy towards the other, and only then will you truly connect.

Part 2: Chassidus’ Approach to Relationships
Judaism teaches us that the ultimate relationship in our lives is between G-d and mankind. As King Solomon said when referring to G-d, “I am for my Beloved and my Beloved is for me”9. G-d is the mashpia – the Giver – in our relationship, and we are the mikabel – the receiver10.  However, before G-d began creation, there was only Himself everywhere. There was no place outside of Him11 where we would be able to exist, because He was beyond time and space, so He occupied all space. So in order for G-d to create the world, He had to go through a four-part tzimtzum – a process where G-d compressed Himself into Himself in order to create a void where we would be able to exist.

Part 2A: Tzimtzum
The first step of the tzimtzum was a twofold process. By condensing his power, intelligence and emotions into a more containable form, He simultaneously created the space in which creation in general would be able to exist, and minimized Himself so that He would be able to reenter that space later without overcrowding it1. The second step was to imagine what man would look like, and what faculties he would need in order to have a meaningful existence. This was done so that He can do another tzimtzum – further condensing Himself so that He would be able to fit into man specifically without overwhelming him. The third step was to open up a channel where creator and creation would have a two-way flow of energy and emotion. Only then did G-d take the fourth step and actually enter this world, and create man. We will look at three analogies to describe how G-d accomplished this with His tzimtzum.

Part 2B: Electricity
The first analogy we will use to demonstrate the tzimtzum is electricity. A waterfall has a huge amount of energy that can be harnessed and turned into electricity. Once the electricity is generated, it gets sent out on very thick cables at a very high voltage to travel to the cities where it will be needed. Before it is ready to be used, it first needs to go to the substation where the voltage will be lowered and sent out on smaller cables. This process is then repeated many times on many levels and is progressively getting less voltage on smaller cables. Only after reducing the voltage many times, is it useful in our homes.

Imagine skipping any one of those steps to charge your phone. Perhaps go right to the source and put your phone directly under a waterfall. We all know that not only would it not charge the phone, it would destroy it. The same is true of G-d and the tzimtzum process; if G-d were to enter this world without first doing the general tzimtzum, then going through the more customized tzimtzum, we would be overloaded and destroyed by His infinite energy.

Part 2C: The Teacher
The second analogy we will discuss will help us understand how G-d imagined what faculties man would need in order to grasp the greatness of creation. Imagine a scientist coming into a second grade classroom, wanting to teach the eight-year-olds about his new groundbreaking research. If the scientist were to speak without condensing his knowledge in a way that the second-grader would be able to understand it, he would not only fail to teach the student anything, he would also hopelessly confuse the child and possibly deter further learning opportunities.

From here we get a deeper understanding of how G-d condensed His intelligence in the first step of the tzimtzum, and we also see how G-d envisioned man in the second step of the tzimtzum. Just as the scientist needed to get the child’s perspective so that he would be able to customize his lesson to fit the child’s needs, so too G-d imagined man’s perspective, and condensed His energy accordingly.

Yet G-d is not only our source of energy – nor is he simply our teacher – He is our one, true love. As it says “Love your G-d with all of your heart”.13 All throughout Chassidus, from the Tanya until the last talk the Rebbe delivered, we learn about     G-d’s love for us, and how we can feel and reciprocate it. Yet G-d’s love is far too infinite for us as well. Before He can share His love, He needed another tzimtzum. A tzimtzum far more subtle than the teacher analogy can explain.

Part 2D: Our Father
Imagine a father who has a one-year-old child. This man is an adult who is married, who has parents, friends, colleagues, and many other people in his life. His emotions are complex, and when he is displaying emotions to a peer, he can do so with the full repertoire of his emotional spectrum. Yet when he wants to play with his child and wants to show the child just how much he loves him, he needs to simplify his emotions into a version of love that the child can feel and reciprocate. This intelligent man – a man who may even run a billion-dollar company – is now sitting on the floor saying “googoo-gaga” and playing with marbles.

This is the same story with G-d. He condensed His emotions to be on our wavelength, and opened up a channel between the two of us, where we can be vulnerable with each other.  It is very selfless of G-d to make Himself vulnerable so that when we do mitzvas He is elated and when we sin He is devastated. G-d is an unlimited being who would much rather not have to constantly constrain Himself so as not to overwhelm us. He also could have saved Himself a lot of anguish if He did not make Himself vulnerable to us. However He does this so that He can be on our emotional wavelength and have a relationship with us.

Part 3: The Conclusion
We can now see the similarities between how G-d formed His relationship, and how psychologists suggest we build ours:

With G-d’s help, we will have the strength to implement the teachings of Chassidus in our own lives. As all of us open up to each other and empathize, we will unite in our love and understanding for one another, which will lead to the utopian age of brotherly love, and the coming of Moshiach.