I’ll Do It Later 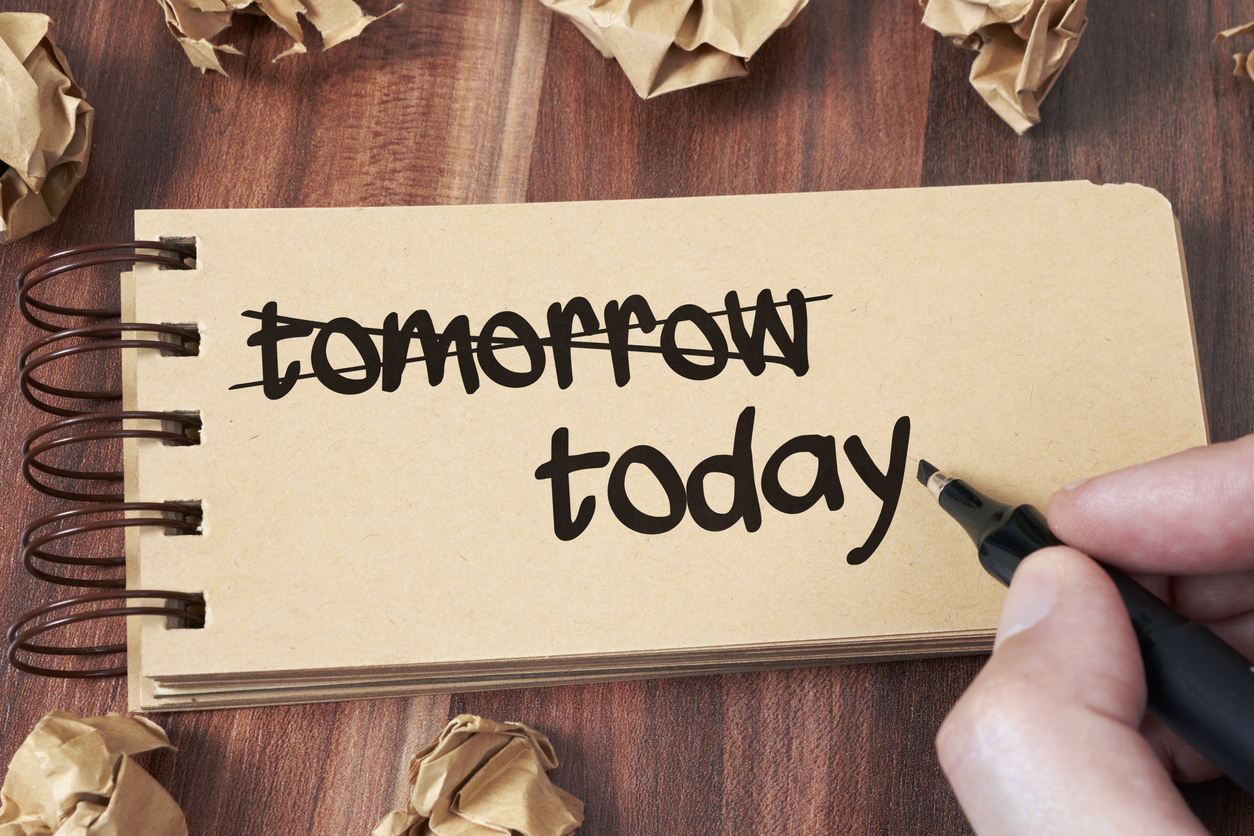 There is an important problem that faces us today that is called procrastination. Procrastination is defined by people just sitting around wasting their days doing absolutely nothing important. Teenagers are particularly vulnerable to the problem of procrastination. They waste a lot of their days just sitting around watching their favorite movies and playing their favorite video games. Just imagine how productive they could be if they wouldn’t waste this valuable time procrastinating. The prescribed way that the secular world deals with this drastic problem is by advocating that people should make their distractions a priority for a limited period of time, and then focus on the task at hand. Although this might help it can also pose a major problem being that, most distractions that people have aren’t actually vitally important, and by jumping to do it quickly doesn’t really solve the problem.

There is a concept that has been brought down in Chassidus that solves the problem of procrastination. Chassidus tells us that we are a G-dly nation and are meant to focus on the priority of serving G-d, and push away distractions in our lives, because distractions are a ploy of the evil inclination to stop us from doing what we should be doing. Another idea that chassidus bring down is Merkava (chariot). Just as a Merkava (chariot) obeys what its master tells it to do, so too here when G-d tells us to follow his commandments, we shouldn’t just sit down and waste our days. We should quickly and swiftly jump from our seats and run to serve the almighty G-d with all our power. This is how chassidus provides a solution to procrastination.

Procrastination is defined as when people willingly try to avoid or delay a task that needs to be accomplished. Here are a couple of examples of procrastination: A person might need to complete some chores or to finish his resume. Due to procrastination he fails to accomplish these important tasks. There are also a couple of reasons that people may start to procrastinate. The first reason is depression. When a person is depressed about something that happened to him, his will to accomplish the task drops tremendously. He feels that it doesn’t matter what he does with his day, so he just sits around wasting his day doing nothing. Many students are found to exhibit signs of procrastination, but often for different reasons. Some feel that high-school is too tough, and they just can’t succeed. So they end up wasting their days doing something easier, often resulting in watching their favorite shows or video games.

The prime cause of procrastination is the need for perfection. Perfection is defined as when you try to be something that you don’t have the ability to be. When the individual notices that he just keeps on failing, he tends to give up and procrastinate. In order to overcome procrastination you must recognize and accept the power of failure without condemning it. A person should stop focusing on the failure that has happened and instead set goals that are easier to achieve. Pier Steels, PhD suggest that better time management is key to overcoming procrastination. He says that designating ones Power Hours to achieve the hard tasks of the day will help stop procrastination. Brian O’Leary says, that one should not over exhaust himself on his tasks. He should instead give himself some leisure time to relax and cool down. This to will help overcome procrastination. The Tanya also addresses this problem of perfection. It teaches us that G-d places a few Perfect Righteous people in this world, but for the majority of us our job is a continuous struggle of pushing away distractions and striving to be righteous. We should not give up or feel downcast, because every struggle we overcome is an elevation.

According to Chassidus every person, creation, or even the very movement of a leaf has an important purpose and an integral mission in this world. Our forefathers are considered to have been the chariot (Merkava) of G-d, because they obeyed G-d’s will immediately just as a chariot that goes in the direction that its master commands. We see this in Abraham our forefather, when G-d told him to “go away from your land to the land which I will show you”.(1) Abraham did not question or procrastinate. He obeyed God’s command immediately. Also when he was given the difficult task of sacrificing his son, and was told. Take your son, your only son, whom you love Yitzchok and go to the land of Moriah and offer him as a burnt offering. It says “and Abraham rose early in the morning…”.(2) He fulfilled his task right away without hesitating.

Our Rebbe behaved in a similar manner, he too would never waste a minute of his time procrastinating. He made his chassidim feel the urgency of their mission to prepare the world for the ultimate redemption. The Rebbe stressed the importance of using your time wisely, and that every person is indispensable wherever he may find himself. Whether your stuck in the airport or in a place where you didn’t plan to be, G-d has a mission and a purpose for you in that moment of time. Whether that purpose is to put tefillin on another jew or to have kindness for another person. There is always something to do.

So how do we overcome procrastination? When each person comes to the realization that he has a divine purpose here on earth to accomplish. He realizes that we are all interconnected and dependant on each other on fulfilling the divine mission, and to propel the chariot forward to the ultimate redemption.

The concept of the Chariot ( Merkava); the surrender of the will to the Divine Will, comes from a vision of Ezekiel chapter 1, where he describes an entire gamut of divine beings which form a chariot and it’s rider. We read about this Vision in the Haftarah on the first day of Shavuot. Shavuot celebrates the day of the giving of the Torah which is the beginning of a new world order in which God could penetrate and elevate the physical world as well as the realization of the Jewish people that all of the physical world is simply a reflection of God’s will.(3) It is God’s desire that he should have an abode amongst the lowest creatures and they become a chariot (Merkava) for him.(4) This is what the rebbe told us “I have done all I can(to bring Moshiach), I hand it over to you-do everything that you can.”(5)

God wants you to be his chariot. No one is indispensable. You hold the key to our release from this exile. To release G-d from exile(6). To hasten the revelation of Moshiach and the building of the third Beis Hamikdash to bring the world to a time when death swallowed up forever. How can you procrastinate? The world is depending on you. Do it now!