A Chassidic Take on “The Four Letter Word” ­ 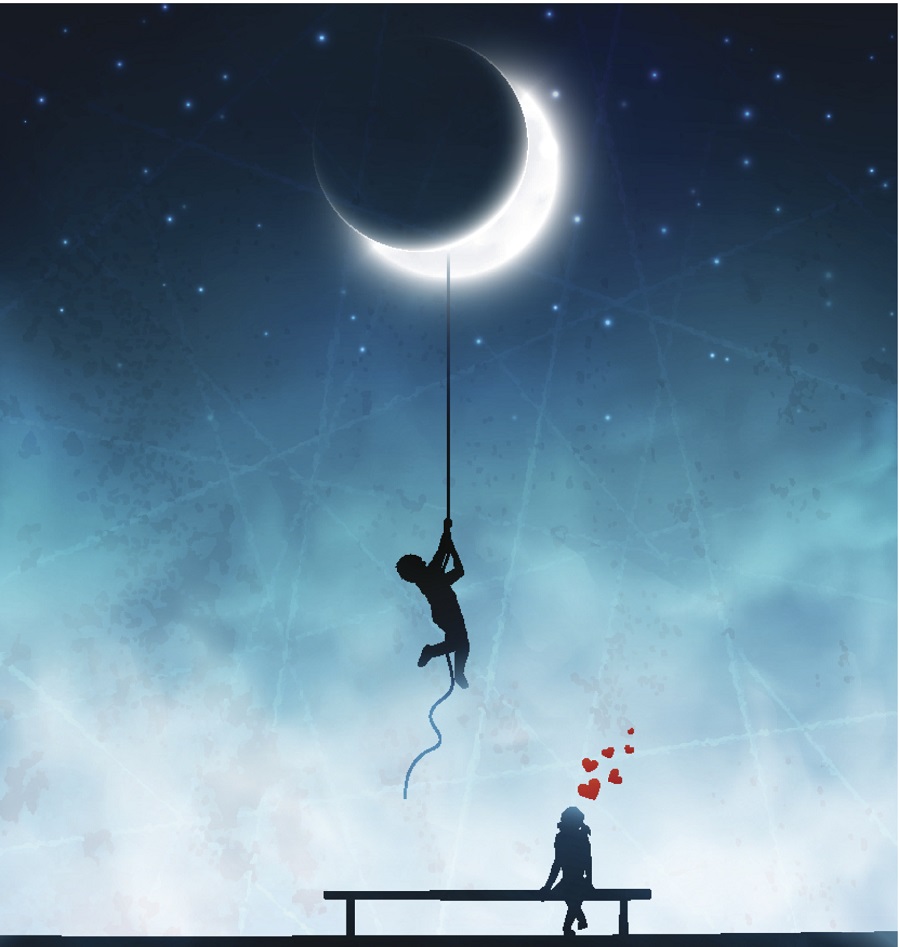 Love. Probably the single­ most abused word in the modern world. In secular circles, it gets flung around like the words “hello” and “goodbye”. In more Orthodox circles, it just doesn’t get used enough. Like it or not, “love” is the craze of the modern world. Everyone is looking for that consistent and meaningful relationship to give their life some purpose, yet, most don’t merit to hold on to it for a substantial amount of time. The importance of this search is attested to by the Talmud, for “a man without a spouse, is not a man.” To now mention the statistics that show the rate of divorce and broken relationships in the world would not only be demoralizing and downright depressing, but would also be unnecessary. It’s no secret what the world of relationship looks like, and the chances of one lasting for a substantial period of time aren’t the greatest. It can also be safely assumed, that even those with working relationships would like for them to be optimized.

What this essay will hopefully show, with G­d’s help, is how Chassidus holds the key to a sustainable love and relationship. This key is found in one of the foremost Chassidic classics ­ and the first Chabad Rebbe’s Magnum Opus ­ the Tanya.

Before we begin to explain what exactly the Alter Rebbe says the key to sustainable love is, one must first define the word “love”. According to the Oxford dictionary ­ the word “love” is defined as follows:

verb ­ to feel a deep romantic attachment to someone or something.

What’s implied, according to the Oxford, is that love is strictly a feeling. However, that isn’t the only definition, Biblical Hebrew has a different take on this word. Take the famous verse of “V’ohavta L’reiacha Kamocha” as an example. This literally translates as, “and you shall love ‘to’ your fellow as yourself” . Thus, according to Oxford and other modern dictionaries, love starts and ends as a feeling. And according to Biblical Hebrew, love demands an action. Feeling is about what I feel; whereas, action is usually associated with an “other”. So love as a feeling only impacts “self”. Love as an action, however, also impacts an “other”.

It is therefore apparent that not only do these two interpretations not align, they’re actually opposed to each other!

Based on the above and taking Biblical Hebrew’s definition, one can already have a shift of perspective about relationships. Love is no longer about how this person makes ‘me feel’, it’s about what I can ‘do for’ this person.

There’s a beautiful story of the Rebbe that punctuates this point. The Rebbe asked someone in a private audience, “why is it that the heart ­ the source of love for G­d and other people ­ is on the left side of a person, when we see that in Judaism there’s a large deference given to the right side, specifically when a Mitzvoh is involved. Why not have the heart on the right side as well?” The Rebbe went on to explain how the placement of the heart does not run contrary to this principle, because it is in fact on the right side. Meaning to say, the function of the heart ­ in the Mitzvohs relating to it ­ is for the other person, so for the other person ­­­­ it’s on the right side! From here we see that love isn’t about what you want to give ­ that’s coming from the left, it’s about what that other person wants you to give ­ and then it’s coming from the(ir) right.

However, being focused on “the other” isn’t enough. An “innovator” can still err in his approach by deciding what the other party really needs/wants. For example: religious “innovators” will claim that ultimately G­d wants them to connect to Him. And if they throw out certain “outdated guidelines” to get there ­ so be it. With this, they’ll lay waste to time hallowed tradition and instead substitute it with “the emotional Jewish experience”. Whether what they do is right or wrong is inconsequential to, and beyond the scope of, this essay. What will be said, is that it’s definitely not the ideal service of G­d ­ and Chassidus will explain why.

Here’s where the Tanya becomes relevant. Very quickly, Tanya is a practical book written by the Alter Rebbe as a quasi substitute for the “Yechidus” (a meeting between Rebbe and Chossid ­ devout follower ­ where the Rebbe gives spiritual guidance tailor made for the individuals needs). Without getting too into the details, the Tanya can be split up into different sections and subsections that address many (if not all) general yet specific issues. The last large cluster of chapters that Tanya has, is chapters 41­50. In this section the Alter Rebbe delineates all the meditations that one should use to attain a proper “ahavah ” ­ love, and “yirah ” ­ awe/respect for G­d. Before he gets into all the different meditations, he starts the section off ­ in chapter 41 ­ with a fundamental rule that reads as follows:

“One must, however, constantly bear in mind the beginning of the service and its core and root…it is not sufficient to awaken the love alone to do good, but one must at least first arouse the innate awe/respect which lies hidden in the heart of every Jew…”

What the Alter Rebbe says here is that love is a beautiful, virtuous and very necessary item in the service of G­d, however, it needs context. Loving without context will almost always lead one to eventually have a misplaced love. The context necessary is “Yirah” ­ Respect . If one’s love is not predicated on full respect of “the other” ­ in the Alter Rebbe’s case, G­d ­ it will not be a real and sustainable love.

Here’s a more human example: Imagine Sara gave her husband a shopping list full of stuff that she needed for the house. This list has all the paper goods and groceries necessary to make it through the week. She gives him some cash to pay for it all and then says, “oh, and if you have some time and there’s leftover money…please buy some nice flowers for the den.” An hour and a half later her husband pulls up with a huge bouquet of flowers. He spent all the money Sara had given him ­­­ on flowers! Granted he bought something that Sara had asked him to buy, but he took it a bit out of context. It almost seems like the only thing he saw was, “what do I want to get her that she also wants.” It would also appear that he was looking for where their interests aligned, and what he thought she’d be happier with, as opposed to just following orders.

This is misplaced love. The reason for this misplaced love is because her husband lacked the most pivotal and fundamental component ­ respect. He did not respect Sara’s sense of priorities ­ albeit with the best of intentions. What she wanted to have done and how she wanted it to be done, he did not really take into consideration.

The husband in this example is analogous to the previously mentioned “innovators.” Both are making a common mistake by having a relationship on their own terms. They’re buying the flowers (which they view as necessary) before buying the other more necessary elements (I.e. what they were told/asked to do first). They’re stumbling because they lack the respect that comes before the love. Browse through any book, blog or article on relationships and one would inevitably find “respect” listed as one of the key components to a relationship, but it’s seldom mentioned as the first step. In the Talmud, as well, it mentions how respect is a necessary component in a relationship. Tractate Yevomos states one of the ways to know if a man has peace in his home: we observe whether “he loves her (his spouse) like himself and respects her more than he would himself(15).” However, even from the Talmud it isn’t clear as to where “respect” falls in the pecking order. The emphasis on “respect” before “love”, is what Chassidus brings to the table.

Admittedly, this confusion is not unique to the “innovators” and Sara’s husband, everyone has that “innovator” inside them. Everybody does things for others on their own terms and in their own comfort zones. Whether it’s in a relationship with G­d or a loved one, everyone does it at some point in time. This is what the Alter Rebbe attempts to make abundantly clear. If one ever wants to have a real and lasting relationship, it has to be predicated on the full respect of “the other.” In his own words: “but one must at least first arouse the innate awe/respect.” If that respect of the other’s ideals and wants is present, then love and feelings can be transmitted appropriately. This is how a sustainable relationship is built.

The way to foster such a respect (as a foundation to love) is explained a few lines later in the same chapter, in the Alter Rebbe’s words:

En Sof (G­d), and on His Kingship, which extends to all worlds, both higher and lower, and that

He fills all worlds and encompasses all worlds…Yet He leaves both the higher and lower [worlds] and bestows His Kingdom upon His people Israel, and upon him (the individual) in particular…”

The Alter Rebbe tells his readers that the way to conceive this ultimate love is through having a clear understanding of who one is dealing with. The takeaway message for the reader, in essence, is that if they want to have a proper love or relationship with their spouse, they have to put them on a pedestal. Look at them and all the amazing things they do and glorify them; an upstanding and moral person, stands up for what’s right with conviction, incredible partner, phenomenal parent, how he/she can work all day and still have so much energy with the kids is beyond me etc. To impress upon oneself how truly amazing their spouse really is. The purpose of this is so that one can fully appreciate who they have. One should ultimately be in awe of their spouse. Revere their spouse. Show their spouse some well deserved respect. When enough time is spent dwelling on all these wonderful things, it compels one to love, and more importantly, to love in the right context.

Not so parenthetically, the Alter Rebbe makes it very clear that recognizing and appreciating isn’t a “one and done” type of exercise, this is something that one must “constantly bear in mind” . To set aside 5 min a day for the sole purpose of noticing and acknowledging all that one’s spouse is and does. Build the respect ­ and love will undoubtedly endure.

With the Alter Rebbe’s framing of Biblical Hebrew’s definition, hopefully this will help the reader to work on his/her future or existing relationships with a significant other and build an everlasting edifice founded on the precepts of Torah and Mitzvohs.