Of Mountains and Valleys 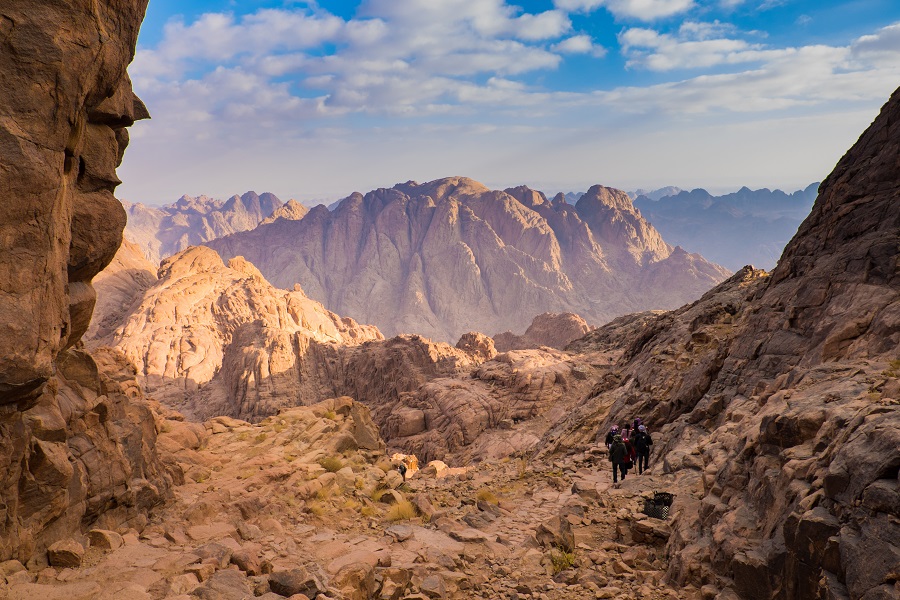 This essay will focus on the lessons that Chasidus derives from Har Sinai- Mt. Sinai, in regards to self esteem, and more specifically the feeling of inadequacy. The two paradoxical points represented in Har Sinai, a mountain, yet a low one, teach us a balance that we need to find between humility- knowing one’s place or level and pride and self dignity or self esteem. This addresses such feelings of inadequacy and may help one find within themselves that they too can make a difference. This can certainly improve relationships such as marriage by recognizing the various roles a person needs to play in order to give and receive meaningfully. The main basis for this essay is an edited talk of the Lubavitcher Rebbe on Shabbos Behar -Bechukosai 5740.[1] The Rebbe did touch on this topic multiple times, see footnote below.[2] (I recall seeing this concept in a mamar of the Rebbe from the early years, but I am unable to locate it at this time.) It is also based on Tanya chapters 1, 26 & 27.

The Issue
There are people who, when faced with the opportunity to make a meaningful contribution to the world around them, shy away from it claiming that they are not worthy of this position. They may view themselves as a person with low self esteem, indecisiveness or lack of real worth. There are people who are in perpetual spiritual agony or despair, because they feel they can not attain the level that they imagine they should be reaching, not realizing that what they imagine is actually not attainable, at least in their current state.

Hashem gave us the Torah on Har Sinai. The Midrash[3] tells us that Har Sinai was chosen because it was the lowest of all the mountains. And here’s the paradox. On the one hand, Sinai is a mountain, which displays height compared to a plain or valley. On the other hand it represents humility and lowliness compared to the taller mountains.

This teaches us that although we must be low, (loosely translated as humble,) still we must not become like a doorstep that is trampled over. There must a delicate balance of humility and pride.

How can we successfully integrate these opposite attributes, though? There is a posuk[4]ויגבה לבו בדרכי ה’ , “and his heart was elevated in the ways of Hashem.” When pride results not from one’s own accomplishments, but rather from the ways of Hashem, then it is appropriate pride. Such pride is not opposing G-dliness, rather resulting from the service of Hashem.

When one is permeated with such a pride, he will not hesitate to do what is necessary to fulfill Hashem’s mission in this world.

For example[5], if one is asked to teach Torah (especially the inner dimension), or to do something on behalf of the community or a community organization etc., and is inclined to turn down the request saying “who am I and what am I, I haven’t reached the sufficient level for (teaching) this.” He will instead respond as our patriarch Avraham responded, “הנני, I am here poised to do whatever is demanded of me to serve Hashem, and help his children!” He will think: I will utilize the pride in the ways of Hashem to overcome my personal struggles, and contribute whatever I can, despite my (perceived) shortcomings. This is how Rashi explains the term הנני- “I am here. Such is the response of the pious; it is an expression of humility, and an expression of readiness to do His bidding.”

The Alter Rebbe elaborates on this.[6] Moshe Rabenu expressed his humility and self abnegation before Hashem, by saying “ואנחנו מה, what are we?” Whereas by Yehoshafat, the fourth King of Yehudah,  it states the aforementioned posuk of his heart being elevated. There, it’s explained that in the mind one must hold himself very low- to an extreme, but in the heart he must be elevated. The heart is especially connected to elevation, because in the heart is correlated with the element of fire, and the nature of fire is to constantly rise – elevation. In order for this elevation to be able to ascend to the mind, there must remain a small part of the mind that is not low to the extreme, but allows in this pride. That is the meaning of the teaching of the Talmud, that one should retain an eighth of an eighth of pride. The pride should be overshadowed by humility, but still remains fundamental to a healthy balance.

When the pride is directed by iTorah, this gives a person the ability to do whatever is necessary for his avodah. So if he is asked to teach Torah, he is there to do it. If he is required to raise funds for a cause, he will not feel ashamed. If he is in shul, and nobody wants to lead the prayers, he will not hesitate to do so. This is because the necessary actions are about something much bigger than himself, and his personal flaws. Imperfections pale when compared to the needed job at hand.

This can help in relationships such as marriage, where it is necessary to set aside oneself for the benefit of the other partner.

It can also help in a situation where it may be uncomfortable to point out to someone something that they need to correct. Even something as mundane as fixing someone’s collar, or pointing out that they missed a button etc.  By telling him this, there may be a momentary embarrassment, but really he will be grateful to you for sparing him continued unknown embarrassment. So the greater good is to point it out to him. One must get past his feeling of discomfort to help another person do what he needs to do.

Basically, once one’s perspective becomes one that recognizes that any pride one has is properly placed in a G-dly direction, then what follows is that whatever is demanded of can easily be done because one is aware that he is here to serve and not to be served. In other words, the world does not revolve around one’s feelings, rather it revolves around the essential and uniting force of the world, namely Hashem. This brings the greatest joy, knowing that one’s life has deliberate purpose and meaning and has the privilege of being part of actualizing this purpose. The more one gives himself over to this perspective, the greater real satisfaction he will have.

If one cannot reach this level, and is stuck in a rut of inadequacy which is essentially false humility, then it may help to internalize what it says in Tanya. In Chapter 1: If one is feeling down, he will not be able to serve Hashem with joy. In chapter 26: If thoughts of melancholy bother a person during prayer, or even during work; if they are not coming at the time he has set aside for introspection, this is surely a strategy of the evil inclination to drag him down. In chapter 27: If a person is saddened from his struggles, this is a sign of haughtiness, that he doesn’t recognize his place and thinks that he is on a higher level than he really is.

The Rebbe once said[7] that the Mitteler Rebbe would tell his Chasidim whenever they would travel (to or) from him that they should publicly review Chasidus in every town they pass through. One chosid told the Mitteler Rebbe that when he sees how his words affect the listeners he feels great satisfaction, from what he accomplished, and from this he feels haughty. The Rebbe responded “May you become like an onion (that enhances the flavors of other things it’s cooked with but doesn’t absorb flavor for itself), but come what may, keep reviewing Chasidus.” This means that even if one feels that this causes him slight haughtiness, he must still teach the Chasidus, because this is what G-d intended for him to do and if done earnestly one will come to realize how little he has to do with the success. His concern about haughtiness should by no means deny listeners the opportunity to learn chassidus. If one has something positive to contribute, why should society miss out because of (perceived) shortcomings? Furthermore if one wallows in self pity or excuses himself because of low self-confidence, this may be the ultimate display of ego, because one is worried about how he’ll be received and is not as concerned with what is expected of him.

Har Sinai teaches us that we must be humble; while at the same time, we must also have an assertive pride- pride in the fact that we were empowered with a mission to fulfill, and given the capabilities to see it through. As we internalize this message, we can begin to shift away from our wants and expectations to responsibility and service. Instead of being users of our surroundings we become useful to our environment. As JFK said: Ask not what your country can do for you, but what you can you do for your country. This provides the greatest altruistic satisfaction possible to man.

Lesson
In summary Har Sinai teaches us the need to utilize the two opposite characteristics of humility and pride in order to feel the self esteem to be able to make a difference. It’s not about me, but about the ways of Hashem. When we internalize this, we should feel great joy and satisfaction, from having broken out of self-centeredness to now reach out to help wherever it can be of benefit.

Schneur Zalman Rabin has been fundraising for the Beth Rivkah Academy in Montréal for over 6 years. He is a community activist and a popular chazan. He also heads the local Chabad Chevra Kadisha. He studied in Chabad Yeshivos, in Montréal, Chicago, Iowa & New York. He received Rabbinic ordination form Rabbi Yaroslavsky. He is the author of a book of summaries of the Rebbe’s talks soon to be published by Kehos. He currently resides in Montréal with his wife and five children.