Seeing The Other Side 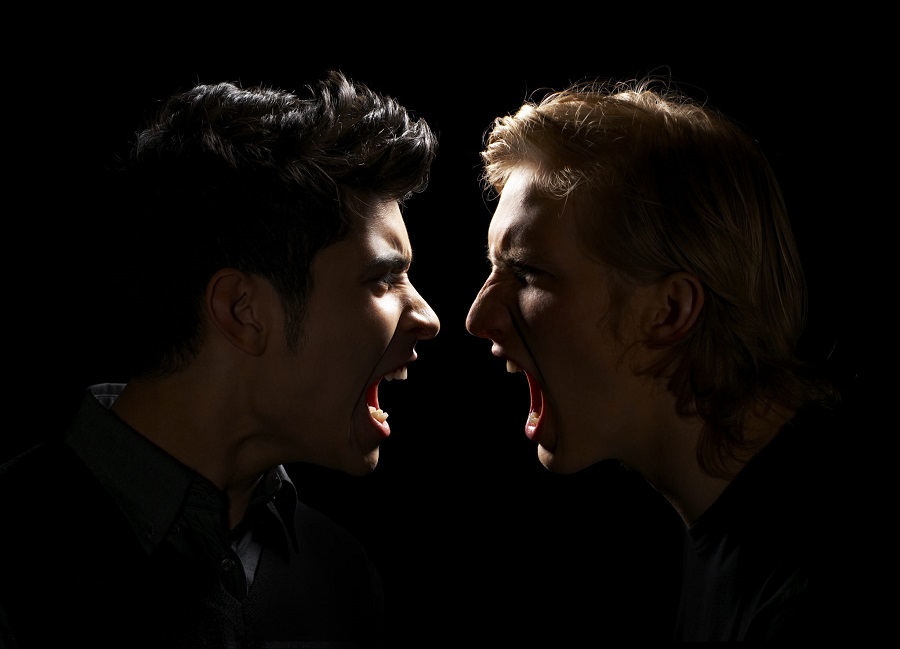 Two disputants came before a mediator. After each presented his case, the mediator asked each to present his adversary’s case. One of the disputants could not repeat it even after several attempts were made by the other to repeat his claim. Apparently, he lacked the ability to see things in any way that contradicted his own narrative.

A thick cloud of arrogance can overshadow our innate inclination to bond, connect and understand those with opposing viewpoints. When two people are at odds with each other, the cloud can be impossible to penetrate, despite all efforts made by logic and reason.

Conversely, there are times when one finds a vulnerability in the barrier, and manages to tune into the ideas thoughts and perspectives of the other. In certain moments understanding and sometimes even acquiescing occurs as the ego reluctantly releases its grip.

The ego, according to Chassidus, impels us to see everything through the prism of self. We find that this sense of self is present among all humans. People of a high spiritual and moral caliber can suffer from the same debilitating ego of the average person. No community is spared the plague of division and discord.

Chassidic thought traces the phenomenon of ego to the two spiritual worlds Tohu and Tikkun which influence, and are reflected in, our personalities.

Tohu radiates powerful Divine energy. Each Divine attribute stands alone and cannot integrate with other forces. The attributes of Tikkun (correction or perfection), by contrast, contain aspects of the other, even conflicting, attributes.

The Tohu personality does not have the capacity to accept another approach. The Rebbe[1] attributes the lack of discord of Rabbi Akiva’s students, which brought about their demise, to the Tohu mindset that could not tolerate conflicting ideas.

Tikkun personalities are distinguished by their ability to get along with others; even with those with whom they strongly disagree because their souls are composite souls, where each component of the soul’s personality contains elements of the other components.

The fifth Lubavitcher Rebbe, Rabbi Sholom Dovber Schneersohn (known by the acronym Rashab) in the famous series of discourses known as Ayin Beis [delivered in the years 1912-1916,][2] shows us how to identify our ego’s role in a conflict, and how to counter it by identifying the source of Tikkun’s unique compatible nature.

All of this is possible because of bittul-self-abnegation, which eschews a monolithic system. Rather, each attribute possesses elements of the other, even opposite, attributes.

This state of bittul that affects one’s emotions [contrary to their natural egotistical state] derives from the intellect. Genuine intellect is synonymous with the bittul mode. Ego is the antithesis of true intellect, as is indicated by the saying, “every egotist is an imbecile.” Authentic intellect requires unmitigated bittul.

The intellectual process involves understanding and grasping something that is beyond yourself. It can therefore instill bittul into one’s personality.

Genuine intellect is receptive to, and interested in going beyond our previous level of knowledge. The intellectual process suffers greatly when there is an ego driven agenda or some pre-conceived and self-serving interest that will color and bias the results of an intellectual inquiry.

The Rebbe Rashab takes the identification of intellect with bittul a step further.

This explains why every intellectual concept can be broken into many disparate and contradictory details. This too is a product of bittul.

Not only is the intellect receptive it is also an integrating and synthesizing force. It can process disparate and opposing concepts and viewpoints.

When one is engaged in a dispassionate analysis of a subject, sans personal biases, he has no problem dealing with disparate and even conflicting ideas. The mind, because of its natural state of bittul, can tolerate and assimilate opposite strands of thought. Only when one has an emotional bias for or against a certain idea, will he find it difficult to tolerate different and opposing views.

We now seem to have a solution to the problem of our egos getting in the way of our relationships. Just put our emotions to the side and focus on ideas and be receptive to others and their conflicting views.

But, unfortunately, not all intellects were created equal. Some of the most brilliant people are supreme egotists.

The Rebbe Rashab addressed this dilemma:

The intellect of the sitra achara, [literally: the other side, referring to the forces of evil and the people who are influenced by them] is [indeed] motivated by ego, as is stated [in Proverbs[3]]: “Do you see a man wise in his own eyes? [There is more hope of a fool than of him].”

The Rebbe Rashab provides a “test” for us to know if our intellect derives from a holy source or from our egotistical Animal Soul.

An ego driven individual will hold on to his opinion and will not yield even a little to the viewpoint of his fellow and entertain the possibility that he is right. By contrast, one who is in the bittul mode will consider his adversary’s logic, even if it is diametrically opposite his own viewpoint. Indeed, he might even embrace it if he [after careful and objective analysis] discovers that his disputant is right.

Not being able to see contrary viewpoints and understand what merit they possess is a telltale sign that you are affected by your own ego’s blinders.

If we analyze all of the divisive disputes that plague the Jewish community it boils down to the lack of bittul, which, as the Rebbe Rashab observed, manifests itself in the inability to see the other’s viewpoint.

For an intellectual position to be credible one must be able to argue the other side almost as effectively as the other person himself. Then you know that your judgment is not clouded and your ego is not controlling you.

In theory, this approach to resolving disputes sounds great. All one has to do is to see an issue from the other’s perspective. However, if one’s emotions (read: egos) are so strong, there is no guarantee that the individual will be able to pursue this intellectual, ego free, approach.

The remedy for this is the institution of mashpia. The Rebbe[4] explained that a mashpia is a mentor, who can view the issues more objectively because he is not governed by our ego. The “only” qualifications for the mashpia, is to be imbued with modesty, kindness and compassion; the three traits in the Jew’s DNA.[5] These traits insure that his intellect is the receptive and humble one; not the self-centered intellect of the Animal Soul. The mashpia’s role is to remove some of the sharp edges and make the person receptive to the other side.

It seems that there is more conflict and discord today than in the past. From the teachings of the Rebbe in this regard, two explanations for this phenomenon emerge.

First, the Rebbe[6] referred to a troubling phenomenon of recent vintage. Many very good people have revealed an ugly part of their personalities.  The Rebbe attributed this to the pre-Redemption phenomenon mentioned in the book of Daniel: “Many shall purify themselves and make themselves white and be refined…”[7]This alludes to the way all hidden matters will come to the fore. The Rebbe explained that we possess hidden talents and powers, both positive and negative, that we may even not know of their existence, and they are now surfacing.

Rabbi Yochanan ben Zakai cried on his deathbed[8] because he didn’t know where he was going. The Rebbe explained[9]that Rabbi Yochanan was so troubled because although he knew all of his life’s positive accomplishments he never had an opportunity to introspect and thereby discover hidden negativity lurking in the subconscious layers of his soul.

The Rebbe concluded that right before the Redemption these hidden forces, both good and bad, emerge into the open, to provide us with our last opportunity to come clean with all layers of our personalities.

To deal with these newly emerging negatives, the Rebbe counseled, we must have a mashpia-mentorimbued with modesty, kindness, compassion.

The Rebbe makes this point in a somewhat different fashion by referring to the challenge of our age: It is “to fuse the powerful energies of the world of Tohu with the ample and receptive vessels of the world of Tikkun.”[10]

As we anticipate the imminent Redemption, we have already been bombarded with unprecedented, spiritual “nuclear” Tohu rays of the future, which makes it very difficult to be receptive to approaches incompatible with our own, for as was mentioned earlier, the energy of Tohu is the cause of division.

But, the fact that we were given this challenge dictates that we have the wherewithal to “square the circle” and become receptive to these transcendent forces of Tohu. We should not look at the social problems we face today as intractable and a sign of our failure to tame our unbridled egos. Instead, we should view this as society’s ultimate challenge to synthesize the two opposite thrusts of Tohu and Tikkun as our way of ushering in the Messianic Age.

The Rebbe explains[11] that Torah is a composite of both thrusts: Tohu and Tikkun. Torah uplifts us to higher spheres and brings us back down to earth. Torah is harmony which creates the ultimate balance between conflicting attributes. Within Torah itself, the subject of Redemption is most suited to introduce the sublime energy of Tohu into the receptive vessels of Tikkun.

But, for Torah to succeed in this fusion, one must approach Torah study with a modicum of humility.[12] And while we need Torah to achieve bittul and synthesis, we also need bittul for Torah to bring about synthesis. So where do we start?

There are different levels of bittul. We begin, by ”bending” ourselves to conform to the Torah’s perspective even if it does not fit into our agenda. Once attached to Torah’s synthesizing power, it instills within us a more profound bittul; one which allows us to see the larger picture and not be caught up in foolish ego driven politics.

[9] Based on Likkutei Torah, Vayikra