Being Happy by Being Yourself 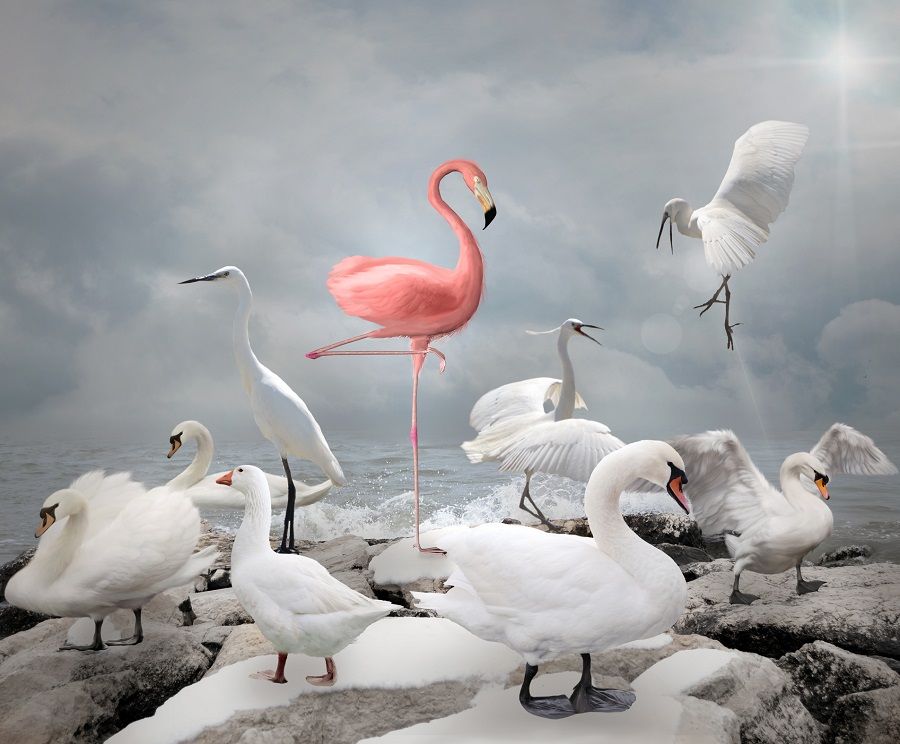 Being a personal and delicate matter, low self-esteem is perhaps one of the most difficult obstacles to overcome. How many of us have built our personalities without basing it somewhat on the opinion of others? This complex seems to sneak its way in from the earliest elementary years in school and can stick around for decades. Several people have a struggle so great that this challenge stays with them for their entire life. Countless numbers of youth and adults alike fail to perform at numerous opportunities due to the watchful eye of critics. Many potential achievements have been lost because of doubting the abilities we possess. This fixation engulfs the sufferer and ultimately poisons his mood, attitude, and perspective of life.

Based primarily on concept of Taanug (pleasure), discussed in the Maamor Samach T’samach 5657[1] pages 260-262, as well as in paragraph 23 and 24 of Shaar Hayichud from the Mitteler Rebbe, and later at length in the Maamor Lech Lecha 5666, this essay will outline the Chassidic perspective of confidence and self-worth, its source, and how to incorporate its feeling into one’s consciousness.

THE ROOT OF THE ISSUE
Contentment stems from the realization of one’s true self and his purpose. The feeling of low self-worth is rooted in a lack of awareness of one’s identity. When one is missing a sense of identity, instead of acting upon what is right and purposeful, he feels a need for validation and seeks the approval of others. He therefore, develops a fictitious character and a personality which is merely a facade to impress observers.

Self-worth and confidence cannot be attained when one aims to be somebody other than him or herself. The constant worry that others will judge, together with the endless uncertainty of one’s efforts, does not allow for the essence of the individual to sprout forth and develop into a palpable sensation of delight, nor for the individual to feel at peace with his or her being.

When discussing the multifaceted personality of a human being, Chassidus divides it into two general categories; the outward, revealed powers which are enthused by outside stimuli; and the inner powers which are built-in and constant, motivated by the unchanging core. The inner powers though, often lay dormant, not influencing the individual because they are covered and outshone by feelings stirred on the surface. This concealment of the inner powers is the deeper, underlying cause of self-doubt.

WHAT IS SELF-ESTEEM?
The deepest power in the structure of a human being is referred to in Hebrew as Taanug, Pleasure. Pleasure though, usually connotes a feeling roused by something enjoyable or a pleasing experience. With qualities that so closely resemble the revealed powers, why is pleasure considered the most essential power?

Generally speaking, the pleasures of this world are characterized by being edible, audible, emotional or conceptual. Each of these types of pleasure and any pleasure inspired by external causes will eventually become stale. This is for the sole reason “Taanug T’midi Aino Taanug, [constant pleasure is not pleasure].” The only constant in a person is his essence. All outward powers, emotional and intellectual, are subject to change based on surroundings, and consequently the pleasure derived from them is as well. Thus, true contentment with one’s self can only be achieved by taking pleasure in his genuine identity.

The Baal Shem Tov’s explanation of the seemingly overexcited behavior of Chassidim illustrates this point. He began using a parable; once, a talented musician came to town and on a random street corner began to play his violin. Anyone who passed by was unable to tear themselves away, and before long an enormous crowd entranced by the magnificent melodies surrounded the violinist. In their elated state, the gathered crowd began dancing, quickly becoming a lively episode of energetic thrill. Unable to hear the music, a deaf man witnessing this scene, wondered what was causing the townspeople to behave in such an unusual fashion. They were jumping, waving their arms, and spinning in circles in middle of the street. He concluded they must have all gone crazy.

“Chassidim too,” the Baal Shem Tov explained, “are energized and excited by the symphony that is sounded by the joined strumming of the G-dly cords found in every creation. Just because those who cannot hear the divine notes think the Chassidim look insane, should they deny their true identity?”

Ultimate pleasure is the outcome of what defines “me”. This core pleasure is derived from that which reflects an individual’s essential state of being; all other desires are mere derivatives.

This defines true, boundless, and never-ending self-esteem; identifying, knowing, and revealing one’s true self. Nothing in the world can cause a greater pleasure than being “the real me”.

CONFIDENCE WITH NO STRINGS ATTACHED
The Chassidic approach to self-esteem provides the perfect balance for a healthy human being. As one walks the tightrope of self-perception he has the possibility of falling into despair and a feeling of worthlessness. At the other extreme though, too great a feeling of importance and prominence may raise him to a state of arrogance and conceit. A related concern as well is the potential lack of responsibility one may feel after attaining composure and happiness with his or her present self.

Chassidic thought presents a perspective from the core of every being, a view which does not allow the abrasiveness of superiority or the impeding complacency of self-justification to overshadow or diminish the positive effects of a good self-image. Instead of focusing on being satisfied with one’s conscious self, which necessitates conceding to shortcomings, Chassidus teaches to focus on the innermost, sublime state of one’s existence and arduously impart it in his consciousness. That deepest core is the source of the level of “Pleasure” and, as quoted in chapter two of Tanya, is “really a piece of G-d from above”. Moreover, G-d imbued his being in every creation, and his desire for each thing he made provides it with a mission, a task which is its purpose for being, and the fulfillment of which, will consequently cause it the greatest pleasure.

Self-esteem is not meant to be an excuse or justification for failures, but the driving force to ensure success. When someone is trying to do the right thing but is embarrassed by those around him or is told by peers that he will never succeed in his endeavors, at that time he is faced with an outward challenge and decision, but more considerably confronted by an internal battle. In such predicaments, only with the knowledge of one’s true identity will he emerge victorious. When one is certain that his efforts are the expression and the authenticity of his being, then the challenge is no longer “should I or shouldn’t I” rather “am I or am I not?” The pleasure of being “me” provides the determination to overcome any obstacle.

When concentrated and inspired by the truth of one’s existence he will never settle for less than his full potential and total capability. Since the motivation for success comes from his true self, that thirst for achievement will never be quenched until the totality of the essential self is reached. By the same token, for a successful person, after he has adopted a proper self-image, though confidence is easy to possess and retain, it will not lead to a distortion of self-confidence and become a sense of self-absorption and egotism because he is directed by a proper mindset; the knowledge that his success is the fulfillment of his mission designed by his creator.[2]

HOW DO I GET THERE
Since as far back as the revelation at Mount Sinai, the Torah has instructed that any and every internal change in the psyche or character of a human being can only be realized through deep, focused contemplation. The Torah tells us in the second paragraph of Shema ’ולעבדו בכל לבבכם’, that the mechanism to instill the love of G-d in one’s heart is intensive mental ‘work’. As such, to integrate self-esteem into one’s personality requires much effort and perseverance.

As daunting as this undertaking seems, the holy Tanya asserts that with a structured system of thoughts and meditations this is the “long, short way”, the lengthy yet direct method of self-transformation. The following is a model of one such approach that one can use when faced with self-doubt, which, when properly implemented, will bring anyone to delight and self-worth.

Here’s an example of what may go through someone’s head:

“I’m told my efforts are feeble and I will never succeed… ok, they’re not saying it but that’s probably what they’re thinking, and lately, inside, my heart is telling me the same. I thought I had what it takes, but so many people will be watching and it may not be good enough for them. I know it’s not right and I feel even worse that I’m giving up. But what can I do? I don’t think the world believes in me and now I’m agreeing with them”

…The technique to cope:

“But wait. Who is the only one who can have a proper assessment of my work, my abilities, or anything else about me? Only the one who made me can. He wanted me here and must have put me in my situation with a goal in mind. Not only did he give me this challenge, but he must have given me the power to get through it as well. He designed the whole world with a plan, and as a part of his world, I must have a part in the plan. So that’s me. That’s who I am and no one else’s opinion should make any impression on me. I have my mission and I should feel proud, privileged, and happy with myself that I am accomplishing my purpose here in this world. That’s ‘being myself’ in the truest sense! Nothing in the world can make me happier than that, so why wouldn’t I want to!?”

THE ONLY THING LEFT TO DO IS BEGIN
Furthermore, this is a responsibility every day for everyone as reflected in the very first Halacha in Shulchan Aruch which rules that one must “be bold like a leopard…and strong like a lion”. This instruction is to build the confidence and the courage to stand up for what is right in the face of those who ridicule and to uncover the inner strength to combat the impulses thrown by the evil inclination. This directive lays the basis for all other subsequent laws as well as all aspects of life, for through it one lays the foundation of his character to be steadfast in his beliefs to not be swayed by the influences of his surroundings. With this attitude one can stimulate G-d’s greatest pleasure and the utmost satisfaction in his own existence. So, tomorrow morning think and reflect on reality, from where the soul was just returned, why it is here, and that it is the “real me”. You’ll be the happiest you ever could be.

Footnotes
[1] This discourse marked the wedding of the previous Lubavitcher Rebbe, Rabbi Yosef Yitzchak. Being extremely lengthy, this essay will avoid the back-and-forth discussion related to the concepts of that discourse, and only extract the ideas relevant to the lesson being conveyed here.

[2] See Likutei Sichos vol. 16 pages 271 and onward for additional application of this idea; how focusing on objective and not paying heed to side inclinations can protect and aid in the internal struggle that one fights with his personal weaknesses.