Reaching Beyond the Work-Life Balance 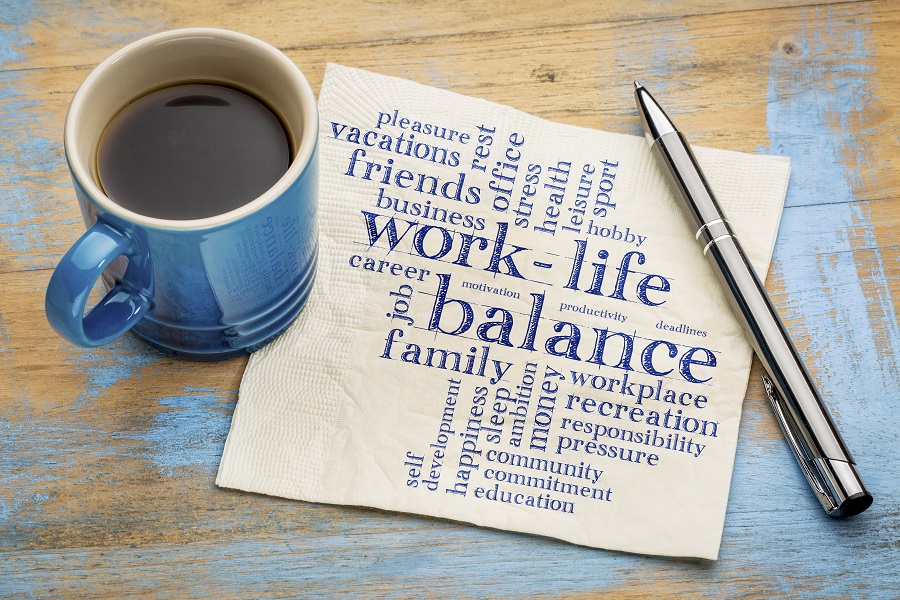 The work-life balance is often held up as a kind of golden mean that represents the optimal management of various aspects of one’s day-to-day reality. It involves devoting a fair amount of one’s time and energy to the home, work and to oneself. In an effort to create peace and order in one’s life, focusing on the work-life balance can lead to a creating boundaries and losing sight of an overarching, unifying purpose. In chassidic thought, the purpose of creation is the geulah, or the redemption of the world, and the Sages teach that a major way to achieve this is through tzedakah, or giving charity.  This essay deals with ways in which the concept of tzedakah unifies the aspects of one’s life to and can provide a model for achieving balance.

Is Pursuing the Work-Life Balance Cutting Us Off?

The work-life balance may be an art, science or skill, but there are as many methods suggested for achieving it as there are lifestyles. The hyphenated concept contains within it other hyphenated units of family time, work-time and me-time, that can drive one to distraction and lead to hyphenated thinking. The stress that can arise from having to shift gears between the various moving parts of one’s life while keeping it all running can be as great as the pressure involved in actually engaging with the issues of one’s daily experience. Medical websites, business magazines, TED talks and bestselling self-improvement books advise ways to organize time, how to relax and focus while trying to juggle work, family and individual goals. The result can be intense compartmentalization and creating borders within one’s own world and in relationships. The outcome can be that people in one’s life are tagged with the label “Child” “Spouse” “Boss” or “Co-Worker” and inhabit a space behind a mental and emotional barrier. The missing ingredient in many attempts to create a work-life balance is a unifying principle or vision.

Our sages say, “Great is tzedakah, in that it brings the geulah” (1). Tzedakah is often translated as “charity” which is not an exact translation. “Charity” connotes something that is given to another person, whereas tzedakah means “justice” or “righteousness” in the sense that the money given already belongs to the recipient and the giver is performing an act of justice by granting it to its proper owner. The geulah refers to the Redemption, or the time when the essence of G-d will be revealed in the world. Currently, the essence of G-d is everywhere, but cannot be detected by our senses, because it is disguised by the illusion of reality referred to as kelipah in chassidic terminology. The geulah will remove these wrappings and reveal the authentic reality of all things and their G-dly source.

The sages say giving tzedakah will bring about this revelation which unifies all things and people by uncovering their divine essence. In the geulah, there will be no need for compartmentalization of one’s life into various categories, because the geulah is holistic and is a unifying principle. Chassidus discusses how tzedakah achieves the geulah, both the future state and in one’s way of looking at the world in the present. The dictum “Great is tzedakah which brings the geulah” can be a key to reframing the work-life balance into a complete involvement of every aspect of one’s life toward the goal of creation.

Schneur Zalman of Liadi, the first Lubavitcher Rebbe, also known as the Alter Rebbe, writes that tzedakah has an advantage over other commandments performed physically, because while making a blessing or shaking a lulav for the holiday of Sukkot involves elevating the Divine energy within the objects and the hands and lips, tzedakah deals with the money that Is earned through labor involving the entire body and all of one’s energy. In chapter 37 of the Tanya or Likkutei Amarim, (2) the Alter Rebbe writes, “Thus, when one gives charity, his money to which he applied all the strength of his vital soul, his entire vital soul ascends to G-d, hence, the superiority of charity over other mitzvos.”

In addition, the Alter Rebbe discusses in the Tanya how money that is earmarked for the purpose of benefiting others can transform our purpose for working. Even though we may be giving just 10% of our money to tzedakah, that and the remaining 90% become included in the mitzvah of tzedakah. Working, then, becomes unified towards something beyond the individual-centered aims of amassing wealth, achieving a personal goal or even struggling to survive. With the unity of purpose provided by the concept of tzedakah, the work-life distinction seems less emphatic, because the boundaries between different aspects of one’s life are not drawn as starkly, and life can feel less compartmentalized. We work so we can provide for our families and raise them in an environment that promotes kindness and comfort and nourishes the soul. We work to spread the influence not of our personalities, but our priorities which have a spiritual source. We work to give at least a part of our earnings to assist others and to refine the world. In that small amount, there is a major conceptual shift towards a common purpose that purifies and unifies.

We see how this concept plays out in the supermarket. Food and grocery companies increasingly emphasize the fact that they sell items that are natural and healthy for the body, and since the body houses the soul, the soul as well. With the emphasis on natural food in a supermarket chain’s marketing, the simple errand of shopping is transformed into an action that will nourish the body, fortify the soul and heal the planet. In a similar vein, it is not uncommon for companies to advertise that a certain percentage of all proceeds will go to a specific charity or cause. This infuses the simple act of purchasing and eating food with meaning and intention, since as one is feeding his or her own hunger and providing food for the family, one is also supporting a cause that goes beyond the confines of the individual and one’s home. This demonstrates something similar to the way tzedakah elevates one’s entire experience through actually requiring just one aspect or portion of it.

One of the subcategories of the work-life balance can be the concept of individual identity versus social responsibility. One person who represented the balance of these faculties and priorities was Avraham, the first Jew. Avraham was characterized by the kabbalistic trait of chesed, which is expressed by kindness, expansiveness and generosity. Avraham broke through the barriers that divided himself and others. After he engaged in solitary reasoning that the moon, the sun and the stars others worshiped as gods had to have a source that was greater than they were in the form of a Creator, Avraham began to share this notion with others. He was put into a furnace by Nimrod for expressing this believe in one G-d, but he refused to keep the notion to himself.

As a man of chesed, Avraham brought his own discovery and self-identity as a Jew to the world. Rashi writes in his commentary on Bereshis 12:5 that Avraham converted the men who came to him and his wife Sarah converted the women. He had many guests and enjoined them to bless their Creator prior to eating rather than paying for their food with money. Avraham transformed his home into his “office” and “headquarters” for sharing his vision and transforming the world. For Avraham, the distinction between work and life, individual and other was not starkly drawn, and he broke down these boundaries by embracing others and including them in his vision.

In a discourse by Yosef Yitzchok Schneersohn, the Previous Rebbe’s (3) he describes G-d’s high regard for Avraham, “I love him, for I know that he will command his children and his household who go living after him that they too will follow the G-dly path of the mitzvah of tzedakah and justice.” The Previous Rebbe cites Orchos Tzaddikim Shaar 17, which discusses, the way “Avraham gave unstintingly of his body and soul. He gave everything he possessed.” This recalls the Alter Rebbe’s description in the Tanya of tzedakah as the highest mitzvah because it involves the mind, body and energy elevated to a higher purpose. Tzedakah isn’t just a matter of giving away some things and making room for other things, as one does when one compartmentalizes time, possessions and energy, but it involves taking a holistic view of one’s circumstances and raising all of the particulars of one’s life towards a spiritual purpose through the dedication of at least a part of it to something beyond oneself. This process is not really a transformation but a revelation of the essence that already exists within objects and people.

This revelation of the divine essence in all things and beings is a foretaste of the geulah, or the redemption and the arrival of Moshiach. The word “geulah” connotes revelation or an uncovering of what is already there. Although we are still awaiting the geulah shleima, or the complete redemption, in actual time and space, flashes of this revelation can be experienced on a day-to-day basis through performance of mitzvos or commandments, particularly tzedakah.

The Alter Rebbe describes how the performance of mitzvos can bring lights of revelation from the highest realms of G-dliness into ordinary objects, but in ways that cannot necessarily be perceived through our senses. In Chapter 37 of Tanya, he writes, “By performing (the mitzvah), man draws the revelation of the Blessed Ein Sof light from above downwards to be clothed in the physicality of this world.” Our repeated performance of mitzvos and acts of kindness will allow this light within to shine brighter until it breaks through the kelipah or concealment that exists in the physical world and is part of a unified revelation that will happen in the geulah. Elevation and unification of aspects of our lives can be accomplished through the performance of mitzvos, which gives us a foretaste of the ultimate revelation in the present moment.

Tzedakah demonstrates that, through an apparently small gesture of putting a coin into a charity box, one can unify the aspects that led to that gesture—the job that provided the money and the home where the charity box is located—into a single effort leading to a goal. The Sages identified tzedakah as the mitzvah that would lead to the geulah, a time when concealment and distinctions will fall away and the divine essence within everything will be revealed. Focus on a unifying purpose can lift someone beyond a condition of sweating details that divide one aspect of life from another. Transcending the work-life balance involves no longer seeing aspects of life in conflict with each other, but bringing them together through viewing them as part of the same goal.

Miriam Metzinger is a freelance writer. She has published human interest articles on Chabad.org, Living Jewish and kept the Jewish family blog on Families.com. She has published a book of essays called Halfway Down the Stairs along with short stories and poetry. Miriam lives with her three children in Jerusalem.