[Now begins a discussion, which spans 7 chapters, that applies the difference of containers (attached and transparent revealers) and garments (detached cloaking concealers), to explain the story of Jacob and Laban. Namely, Jacob raising the stone as a pillar and Laban making from the stones a mound, with Jacob reflecting the level of atzilus, where the containers — like luminescent stones — are transparent channels of the energy, and Jacob transmits levels that are beyond the parsa (curtain). While Laban erects a mound of stones, with the intention of intensifying the concealement of the garments and curtains to impede the flow of energy from (malchus of} atzilus to biy”a. The higher Laban erects a “healthy” mound which is the parsa between keser and atzilus, allowing for the divine flow to enter existence without overwhelming it].

This will explain the episode (at the end of this week’s Torah portion) of Jacob and Laban constructing stones as a boundary between them: As Jacob returns to Israel after spending twenty years in Charan working for Laban, tending to Laban’s sheep, Jacob and Laban have a final encounter, in which Jacob took a stone and raised it as a pillar (matzeivah). Jacob then instructed Laban’s people to “gather stones,” and they proceeded to make a large mound (gal). Afterwards Laban said: “The mound shall be a witness, and the pillar shall be a witness. I am not to go beyond the mound… and you are not to go beyond the mound and pillar.” The Bechayei writes that Jacob instructed them to build a pillar as he did, but instead they built a mound (with the intent to replicate the sun which they worshiped).

The spiritual significance of this episode: Laban (which also means white, loven) is the cosmic level of the “supernal whiteness” (loven ha’elyon) that precedes all emanations. Jacob’s work in tending to Laban’s sheep (tzoin lovon) is the spiritual service of drawing out (sheep in hebrew, tzoin, is the from the word “tzei,” which means to draw out) energies from their source in the “supernal whiteness” of the simple unconscious pleasure (ta’anug ha’poshut), refining and breeding them into akudim, nekudim and verudim (three types of sheep), which refer to the general cosmic order of the macrocosmic beriyah, yetzirah and asiya. Jacob, “baal ha’tikkun” (the steward of atzilus) is the one that reveals the “supernal whiteness” into the three worlds of akudim, nekudim, verudim.

[These are three progressive levels of divine emanation, which define the entire cosmic order and structure of existence:

1) Akudim (ringed sheep): The rings are bound forms of energy (‘akud’ in Hebrew means bound). The world of akudim is a very early stage in the cosmic order where the ten sefirot – the building blocks of existence – are “ten energies (orot) bound in one container (keli).” The ten emanations are so intense that they cannot yet be distinguished as ten individual forces, and the ‘container’ is just beginning to emerge. Like a seed in its earliest budding stage, the container is tiny, but within it lies concentrated all the energy and details which will in time emerge.

2) Nekudim (spotted): The spots (or dots) are isolated points (nekudah in Hebrew means ‘point’). The world of nekudim is the next stage in the cosmic order, in which the ten sefirot exist as isolated, uncoordinated points of energy. As this stage the energy (light) has become somewhat diminished and is not as intense as in akudim, hence, ten distinct points; the containers have now matured and are no longer just one single container, but they have developed personality. Yet, in this world – also called the world of tohu (chaos) – the energy is still too intense for the containers, and being that they are uncoordinated energies the containers are unable to contain the intensity of the energy and they shatter (shevirat ha’keilim).

3) Verudim (speckled): The speckles are combined colors (see Zechariah 6:3. Ohr HaTorah Beshalach p. 395) or interconnecting stripes. As Rashi explains verudim: “A white thread encircles his body all around, and its stripes are open and penetrating from one to the other.” At this third stage in the cosmic order the world of verudim – also called ‘tikkun’ and ‘atzilut’ – the energies and containers mature to the point of harmony and coordination. They are no longer ten isolated points, but are one interconnected ‘network’ of sefirot, all working together. Hence, the name ‘tikkun’ they have the power to repair the ‘shattered containers’ of nekudim. The energies in verudim are weaker per se than those in nekudim, and the containers are stronger, yet this is what allows them to fuse with each other. Instead of only two opposing forces in nekudim, the third dimension is introduced, that like a spine, supports and unites the entire structure].

1) Laban (in holiness) is the “supernal whiteness” which is higher than Jacob who is the level of atzilus. And the mound built by the “supernal whiteness” signifies the curtain (parsa) that separates the divine infinite energy of the emanator (the source) from the emanations of atzilus. Just as their is a curtain between atzils and biy”a, there is also a curtain between keser and chochma (of atzilus), to regulate the flow and ensure that the energies that manifest in atzilus are measured and defined.

The “curtain” is comprised of disorganized letters (like stones, which are letters, heaped in a pile), which conceal the idea (like a riddle, or like the letters in amulets), unlike the organized letters of containers (like spoken words), in and through which the energy (idea) shines.

However, the “curtain” between keser and atzilus does not totally conceal: The letters and containers of keser are like engraved letters, which have no substance of their own (they are engraved in the actual material). Therefore, though they are disorganized, they don’t totally conceal, and the energy that flows through is of the same “personality,” albeit diminished. By contrast, the “curtain” between atzilus and biy”a distorts the energy of atzilus, and the energy that shines through the curtain is only a derivative light (ohr shel tuldah), dissimilar to the “personality” of the energy of atzilus — because the the letters and containers of atzilus are like written letters, which have substance. Thus, the disorganized letters of the “curtain” totally conceal.

Yet, since the energies in atzilus are measured and contained (because atzilus is a structured entity of ten sefirot), and are thus a leap below the infinite energies of keser, the “curtain” serves to filter the energies so that not flow infinitely from their source, but only through pierciing the “curtain” (like chochma that gleans energy from the mazal like a hair follicle that pierces through the skull). This is the level of Jacob, Yaakov, which is comprised of the same letters as “yiboka” — pierce.

[More specifically:] Jacob first began by drawing down (tzoin lovon) the core essential energies from the “supernal whiteness” of the simple unconscious pleasure that are not subject to any concealment. This is the level of divine transmission generated through Torah and mitzvot. One can say that this was like the level of divine revelation at the time of creation when the “world was created complete” (see ch. 106), which [paved the way and] was in order to [enable us to later] draw down this energy through our work. So too Jacob began by drawing down all the energies — both the inner and the outer ones, all in abundance without any limits. Then [after his 20 years of tending to Laban’s sheep, and as he was returning to Israel] came the mound/curtain, which regulates the flow in the cosmic order, so that it should manfest in parameters and structure.

2) Laban is far lower than the level of Jacob (atzilus) — he is the kelipat nogah of beriyah, which is called Laban down below — chochma of kelipah (arami oveid ovi, an Aramaean (Laban) tried to destroy my father (Jacob), indicating that Laban is the level of chochma (father) of kelipah which opposes chochma of holiness). This represents the ego which resists being sublimated and encompassed in the higher sanctity of atzilus (Jacob), shem mah. He therefore constructed a mound — a barrier — to separate between them, so that the divine holy energy should not shine in him and sublimate his being. The fear that “perhaps his eyes will see,” as stated in the Zohar, that when they announce above, “who wants to see the face of the shechina” (divine presence), the “other side” (sitra achra) runs away because it doesn’t want to see any divine revelation that will cause it to be humbled.

This explains why Sinai took place only after Yisro acknowledged G-d: Yisro too is the level of chochma of kelipah (kohen oin). A special dimension of energy (yisron ha’or) was generated through Yisro’s acknowledging and sublimating himself to the divine, which in turn was caused by Moses, because Yisro’s acknowledgement came after he heard about the miracles of the Egyptian exodus and the parting sea — the divine revelation drawn down by Moses. Thus Moses drew down the divine emergy which sublimated Yisro. And the beginning of this transmission started with Jacob (who drew down a similar level of energy, which impacted Laban, as will be discussed in ch. 108).

This explains the opening verse (of this discourse), “Let this stone that I have set up as a pillar (matzeivah) become a house of G-d.” The lifting of the stone and setting it upright as a pillar is the work of elevating malchus (hakomas ha’malchus), illuminating it. The “stone” is a mere point, which has no energy/light. Jacob’s achievement in lifting the stone and turning it into a pillar was that he elevated the point of malchus into a full entity (partzuf), revealing light in malchus, and in turn causing malchus to reveal divine energy in the lower worlds — countering the concealing mound of Laban (of kelipah).

Jacob then designated the pillar to “become a house fo G-d” — that malchus should receive additional energies and radiate with the revelation of the inner and core divine infinite energy, which is beyond the structured flow of the cosmic order )this is the level of the full moon, as shall be discussed in ch. 103-104), and that through this the divine light should literally manifest in the worlds. In order to reach this state, malchus must first be elevated to being a point [the many stones turning into one stone — see opening of the discourse. Torah Ohr on this verse xxx].

This explains why the verse is written in the masculine (“yi’hi’yeh beis Elokim”, when it should have said “te’hi’yeh” fitting to the feminine “ve’ha’even ha’zos”): When malchus is in a state of elevation infised with the inner core divine energy then malchus is a transmitter (not a recipient) of light to biy”a. As discussed earlier (ch. 77) about “adon uzeinu,” that all the levels above malchus are masculine (transmitters). Thus when malchus elevates and receives from binah it too assumes the masculine (tramsmitting) role and is called “adon” in the masculine. Similarly, when the core energy radiates in malchus, it is described as “ye’hi’yeh beis Elokim.” We can also say that “yi’hi’yeh” refers to a state when vav-heh (z”a and malchus) will be on the same level as yud-heh (chochma and binah), as discussed earlier (ch. 106) from the Arizal, that this was the state pre-sin, and so will it be in the future. 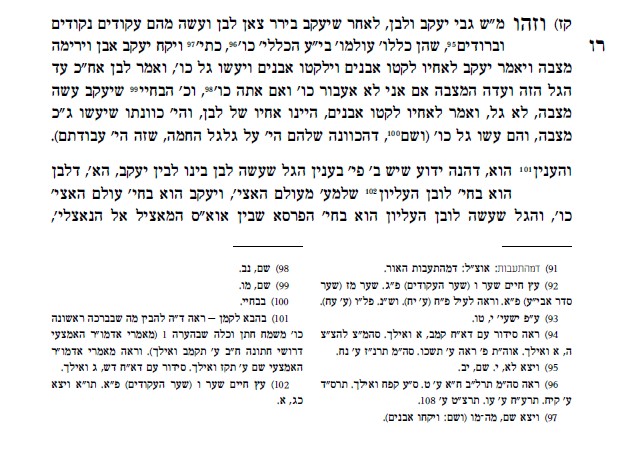 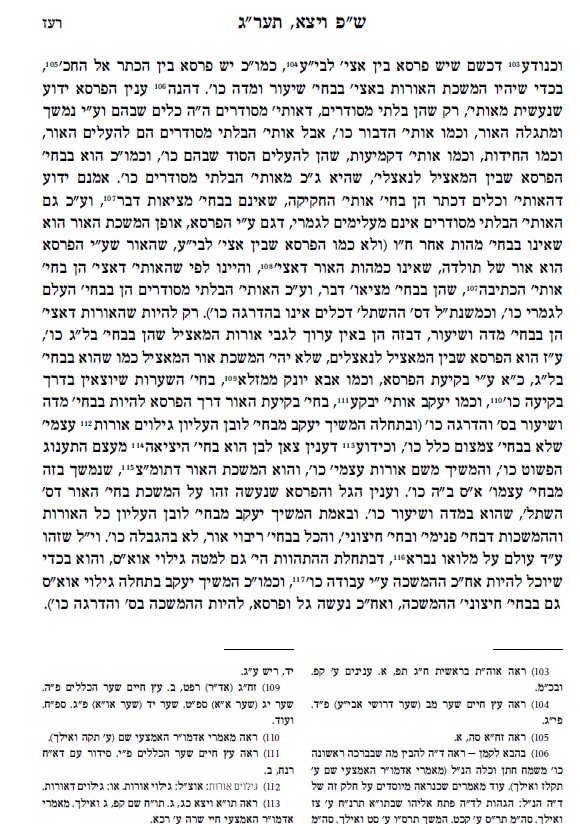 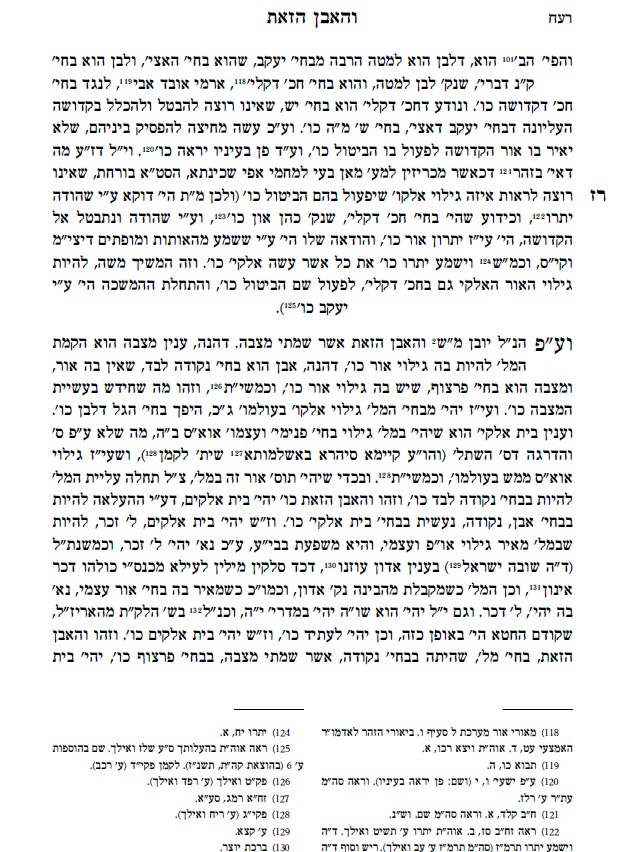 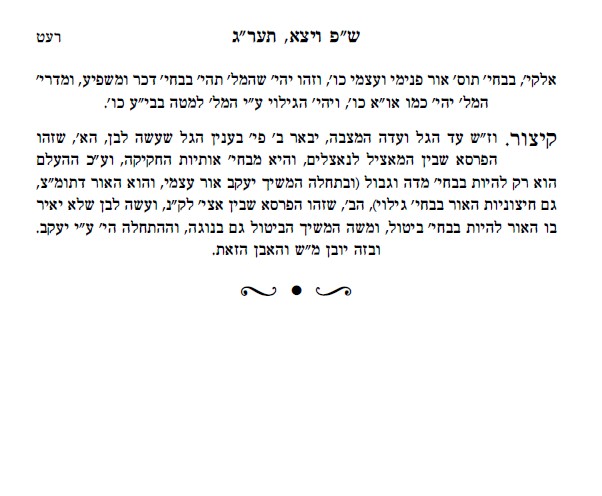