The difference between the immanent energy, which is only a reflection that manifests differently in each level, and the transcendent energy, which is an essential force that is equal everywhere, is like the difference between the faculties and desire: the faculties are defined entities outside of the essential soul each with its own distinct function, while desire has no distinct identity and function, and only reflects the soul’s inclinations.

“Kodosh.. meloh kol ha’aretz kevodo,” “[You are] holy”… the entire earth is filled with His glory” — refers to the transcendent energy, which is separate and apart (kodosh) from existence and is equal everywhere. The immanent energy fills “the entire earth” only with the reflection (glory) of the divine that manifests differently in each level of the cosmic order. But the transcendent energy, though it fills all of existence, “the heaven and earth I fill,” yet “the heavens and heaven of heavens cannot contain You” — the transcendent energy (as explained in Tanya that the ohr makif is within existence, just not graspable and containable). Which is why the seraphim angels (who declare Kodosh…) stand in awe and bittul as they appreciate the wonder of the divine; recognizing how the energy in existence is a mere reflection, they aspire to be encompassed in the essential transcendent energy.

The difference between the immanent and the transcendent energy is like the difference between the faculties (kochos) and desire (ratzon): the faculties are defined entities outside of the essential soul each with its own distinct function, while desire (though it also a faculty of the soul) has no substance — no distinct identity and function, and only reflects the soul’s inclinations. Therefore, when the soul ceases to desire, the desire disappears, because the desire, even when it exists, has no substance except as a reflection of the soul’s expression. Unlike the faculties, which have substance and thus produce matters of substance — an idea or a feeling — that remain in existence even once the faculty is no longer consciously at work. The idea can be retrieved from memory, and even more so, when it was conveyed to another or was written down, which remains for posterity. And the product of the feeling, like an expression of kindness that lifts another person, remains with the other even after the faculty is no longer manifest.

The same is above: If the immanent energy were to be removed, the containers would not cease to exist; the energy would be concealed, but something would remain (like the hidden energy, the “sefichim,” which exists even in exile). But if the transcendent energy of the divine desire for existence were to be removed, G-d forbid, all of existence would cease to be. This explains how our material world expresses “ayn oid” (“there is nothing”) — the utter and absolute reality of the Divine Essence, because our existence came into being only due to the divine desire, which has no substance and thus produces nothing of independent substance. Thus, if the desire is removed, nothing remains. Which tells us that even as the entity (the yesh) exists it truly is non-existent — reflecting the “non-existential existence” of the Divine Essence. 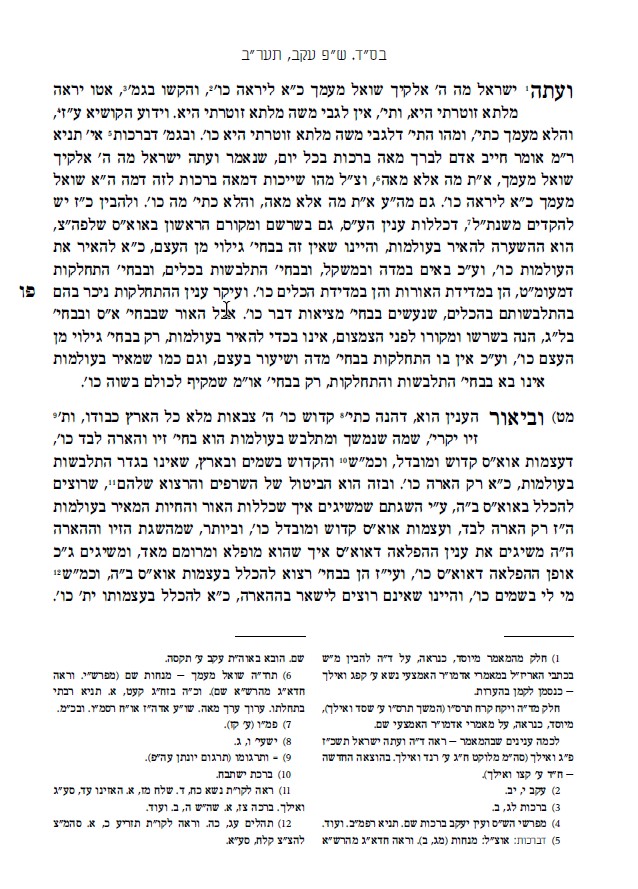 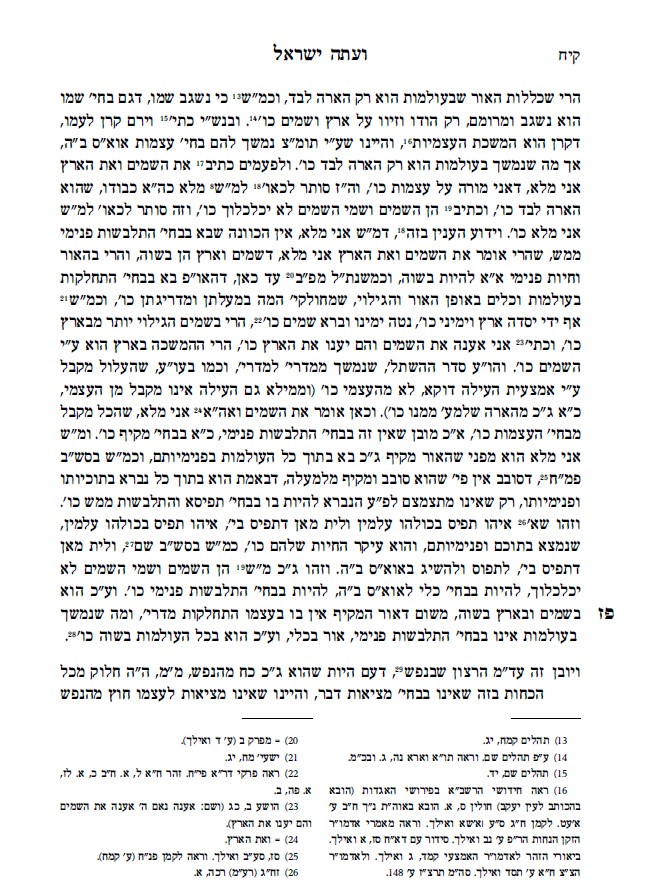 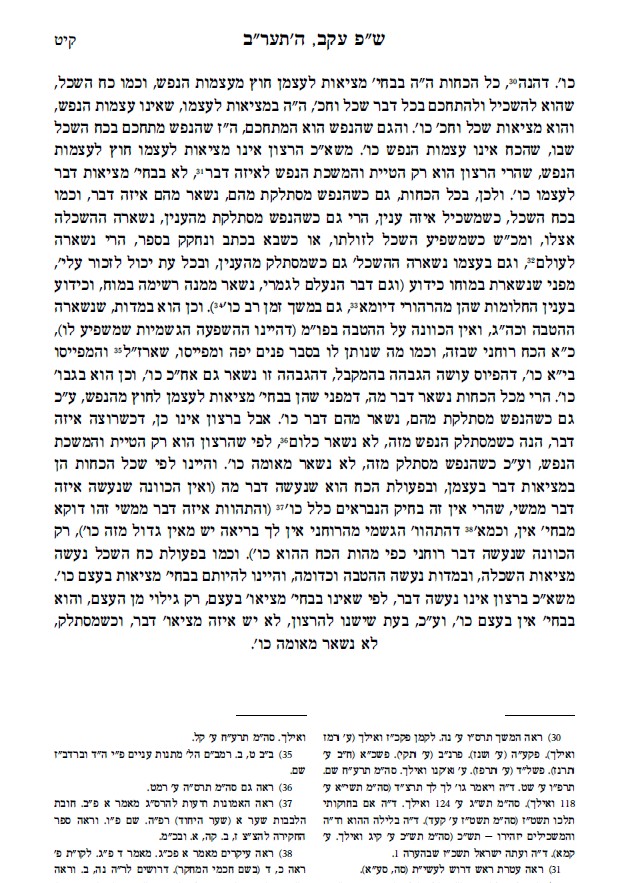 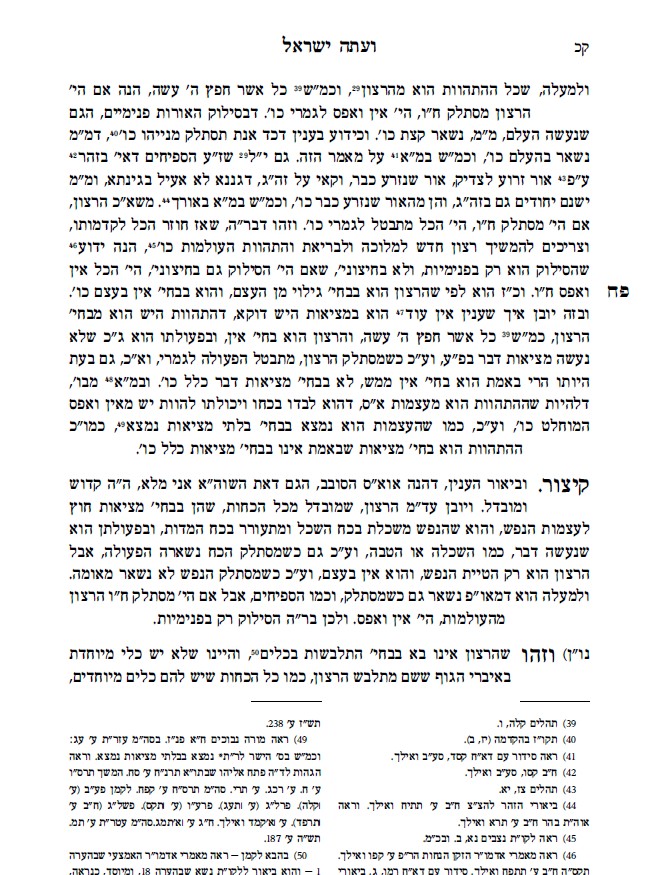 In these places (5563 p. 530. Maamorei Admur HaEmtzoei p. 183. Ohr HaTorah p. 227. Samach Vav) he enumerates three differences between makif and pnimi: 1) It does not manifest in containers. 2) It manifests equally everywhere. 3) It is indivisible. Here in Ayin Beis the primary focus is on the first two elements, as well as adding a number of other factors. See the analysis in chapter 52.