The primary factor driving human faculties is their being fundamentally integrated and finite forces. The soul itself is indivisible and unlimited. Yet, it carries and contains the capacity to project defined and limited powers. Though these powers within the essential are also unlimited, they undergo a tzimtzum, a concealment, that allows them to manifest in limited form as they are internalized in the human faculties. 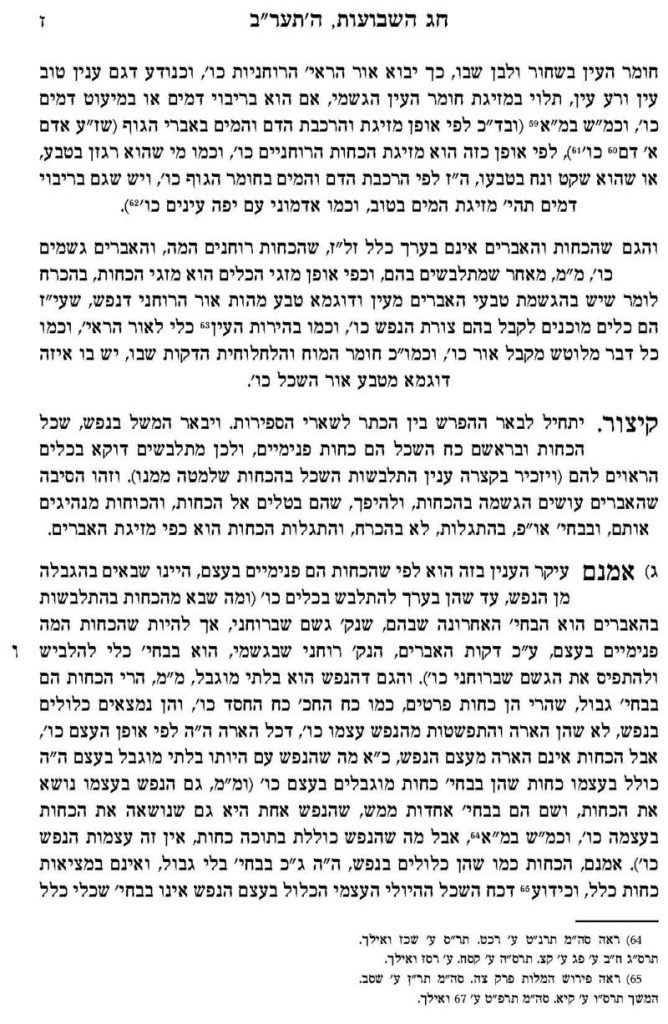 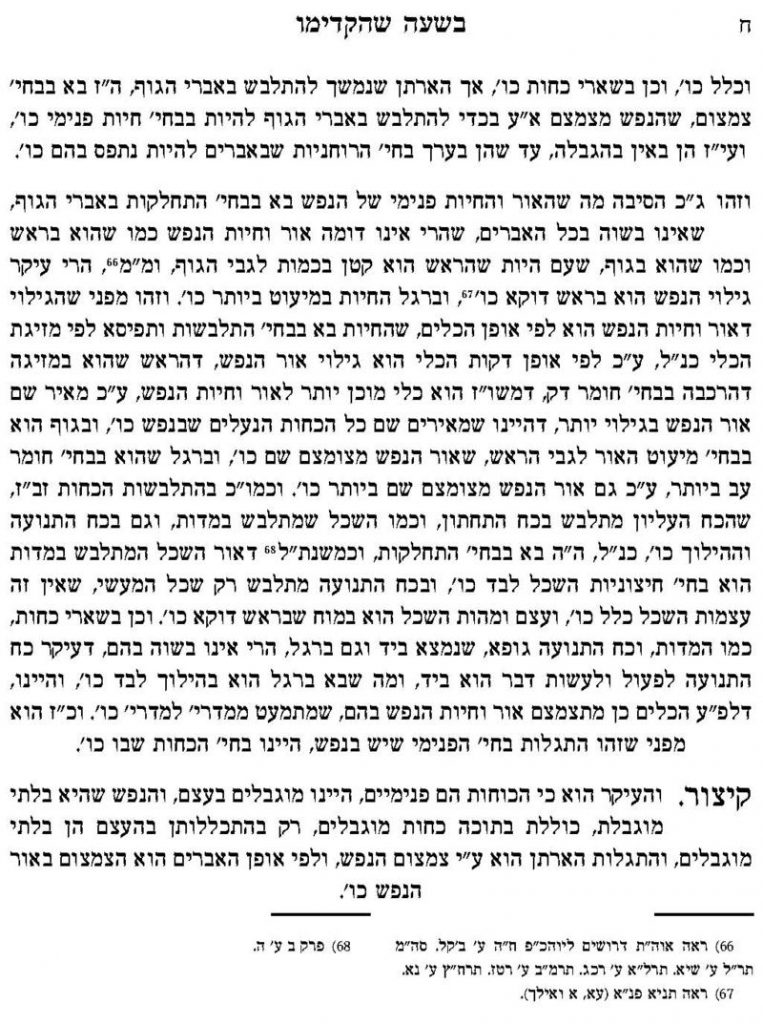 In viewing the video for Chapter 3 – Faculties(2), I found some interesting parallels to research done over the past 25 years in the fields of BioPhysics and Consciousness.

The particular points in Rabbi Jacobson’s discussion centering around the concepts of ‘OHR PENIMI’ including the descriptions of Energy (KOACH) in a container (KELI) have particular parallels to the research papers of Roger Penrose, Stuart Hameroff and Karl Pribram among many others, in my opinion. I will discuss specific papers published by these gentlemen and try to relate specific items and definitions to those in Chapter 3.*

OHR PENIMI, as I defer to the glossary of terms, is defined as one of 2 forms of divine light/energy which define existence. ‘PENIMI is permeating and originates from finite energy (koach haGvul)’. The key concept here is that of ‘HITLABSHUT which means enclothing or the vesting of Divine life energy in an entity in a manner which the Divine life energy adapts itself to the level and condition of the recipient’. ‘KOACH is the ability or force as it exists in a potential state’. Rabbi Jacobson describes this process as ‘Matter within Spirit’ and Spirit within Matter’. The container (KELI) will have a level of spirit within it’s matter and the Divine energy will have a level of matter within it’s spirit. The spirit ultimately condenses to the internal life force by the means of concealment (TZIMZUM).

I will try to summarize 2 articles that in my opinion parallel what the Rebbe Rashab was writing. Footnotes will have detail of the article names and authors. My attempt at parallels will be in italics. I will also underline key words and phrases that relate directly to discussion in the video.

The first article ‘Quantum computation in brain microtubules: Decoherence and biological feasibility’, was co-written by Stuart Hameroff in 2002 in the Journal of the Physical Review of The American Physical Society (1). It talks about ‘Quantum computation in brain microtubules….’. “ The Penrose-Hameroff, orchestrated objective reduction (orch. OR) model, assigns a cognitive role to quantum computations in microtubules within the neurons of the brain”. Despite an apparently ‘warm, wet, and noisy’ intercellular milieu, the proposal suggests that microtubules avoid environmental decoherence long enough to reach threshold value for self collapse (OR) by a quantum gravity mechanism put forth by Penrose”[IBID].

I believe this is a direct analogy to divine energy (OR = OHR) (quantum gravity) interfacing to containers(KELIM) in the brain (microtubules) acting to effect or shape (OHR-PENIMI) the brain function (Synapses). Synapses as we know are the key component of driving or facilitating our physical and mental existence. In fig. 2 in the paper, which I cannot duplicate here, shows a “tubulin dimmer composing a microtubule which can switch between two or more conformations coupled to van der Waals forces in the hydrophobic pocket of each…”[IBID] When you see figure 2 it, in my opinion, demonstrates the concept of spirit within matter and matter within spirit.

The introduction of the article states that the conventional biophysical approach to understand cognitive processes can be modeled by classical physics. (neural networks). “However, physical effects in the functioning of the nervous system, which lie outside the realm of classical physics, suggest that such simulations may ultimately prove insufficient to the task”[IBID]. There is now ample evidence in the analysis of sensory organs that their operations are quantized at levels varying from the reception of individual photons by the retina to thousands of phonon quanta in the auditory system. In other words, there is now a debate that synaptic signal transmission has a quantum character.

The introduction goes on to mention that “new MRI techniques of the brain demonstrate that quantum coherence exists in the brain and that biology can take advantage of quantum modes in clever ways”. “Penrose, in particular has argued that human understanding must involve a non-computational element inaccessible to simulation on classical neural networks…….Penrose and Hameroff have put forth a specific model – orchestrated objective reduction (orch. OR) – positing quantum computation in microtubule protein assemblies in the neurons of the brain”[IBID].

“Microtubules are hollow cylinders whose walls consist of 13 columns (protofilaments) of the protein tubulin arranged in a skewed hexagonal lattice. Along with other structures, microtubules comprise the internal scaffolding – the “cytoskeleton” – in cells including neurons”. “determinates of both structure and function, cytoskeletal structures are dynamically active, performing a host of activities instrumental to cellular organization and intelligence”[IBID].

While the scientific world calls it quantum gravity and quantum character, I believe the Rebbe Rashab has exactly described the reality of how the divine process and divine energy (spirit/soul) affects the containers in the brain called ‘microtubules’. I believe Rabbi Jacobson was discussing examples of inter and intra cellular interactions in the video as well.

“The Penrose-Hameroff proposal suggests that…. the OR model is a preconscious process and that “quantum coherence that persists….. could regulate neural processes…..by ‘orchestrating’ state vector reductions to perform quantum computation”[IBID].

Is quantum computation actually the precondition to human faculties as defined in Ayin Beis?

Towards the end of the paper, there are two points made that I believe demonstrate the ability of divine energy to create order from disorder in the brain as the ultimate first vessel (KELI). First point or example is that the OR theory overcomes the influence of decoherence in a rapid fashion which is what happens in quantum systems such as lasers which maintain quantum coherence against thermal disruption at room temperature. “ The lasing phenomenon is about a supply of energy that is transformed from incoherent to coherent form, with an attendant reduction in entropy (disorder) and increase in order.”[IBID]. The last point, which parallels a discussion by Rabbi Jacobson, is the analogy to the effect on water being reduced to a container to be utilized by faculties. “ In the ..OR model, actin gelation encases microtubules during their quantum computation phase. Afterwards, the gel liquefies to an aqueous form suitable for communication between microtubule states and the external environment . Such alternating phases can explain how input from, and output to, the environment can occur without disturbing quantum isolation.” ….. “ The water within cells is itself not truly liquid, but has been shown to be, to a large extent, ordered. Most of the ordered water in the cell in fact surrounds the cytoskeleton”[IBID]. Neutron diffraction studies indicate several layers of ordered water on such surfaces, with several layers of partially ordered water”…..”Bundles of microtubules encased in actin gel may be effectively isolated with the decoherence-free zone extending over the radius of the bundle..”[IBID].

Again I believe the parallel to the ideas in Ayin Beis, chapter 3 of divine energy interacting to help shape containers for human faculties is unmistakable.

The second paper is entitled ‘Cytoskeletal involvement in neuronal learning: a review’ by Stuart Hameroff among many others. This was published in 1994 in the European Biophysics Journal. This paper talks about the learning and cognitive processes and what are some of the possible mechanisms in the brain.

The paper introduces the ideas of neural networks in the context of currently recognized cellular structures within neurons. “Neural network models and paradigms require adaptation of synapses for learning to occur in the network”(2).

I believe the parallel here is to energy of the soul affecting a vessel or KELI, namely neurons and synapses within them. The key word above is adaptation of synapses.

The paper goes into much detail of how the cell structures interact with signaling to achieve the proper learning (faculty). An interesting paradigm is that there is a “requirement for reciprocal communications between pairs of neuron-like components and require information flow to go backwards through the network as well as forward”(2). The idea is to postulate additional mechanisms for faster signaling along the cytoskeleton. “The cytoskeleton is a lattice-like network of protein polymers and associated proteins. It is found in the interior of neurons and collectively supports the cell structure and internal cell processes.” [IBID]. This network contains microtubules which were mentioned in the first paper and are parallel to vessels or containers.

Essentially these structures are modified vessels or containers containing condensed spiritual energy in my opinion. The interaction between matter and spirit or particles and energy waves is also a parallel to the discussion in Chapter 3.

“Material transport can be considered a mode of intracellular signaling in which information is represented by the presence, absence or movement of particular substances. Retrograde transport may recycle some material or provide feedback information.”[IBID] Again the same parallel just mentioned.

The paper concludes with a discussion of cognitive processes. “Experimental evidence suggests that the cytoskeleton may be directly involved in neuronal information processing, cognition and learning.”[IBID].

I hope you have found these parallels and discussion helpful. Please comment on what you see or think of this analysis. Thank you very much.

* I would like to add that I am not a specific expert in these fields but have a science and engineering background by degree. I am currently a member of the Acton-Concord Chabad in Acton, MA. I would also like to thank Club72 member Sara Greenberg for her valuable inputs.
(1) S.R. Hameroff, S. Hagen, and J.A. Tuszynski (2002) Quantum computation in brain microtubules: Decoherence and biological feasibility. Physical Review E, Volume 65, 061901, The American Physical Society.
(2) Stuart Hameroff, Judith Dayhoff, Rafael Laboz-Beltra, Charles E. Swenberg (1994). Cytoskeketal involvement in neuronal learning: a review. European Biophysics Journal 1994.