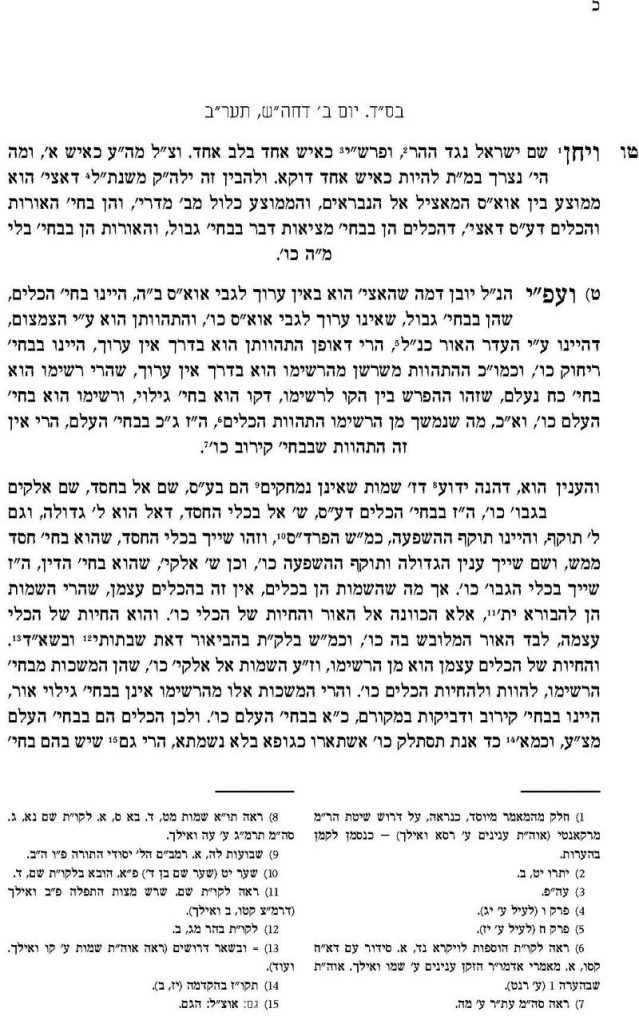 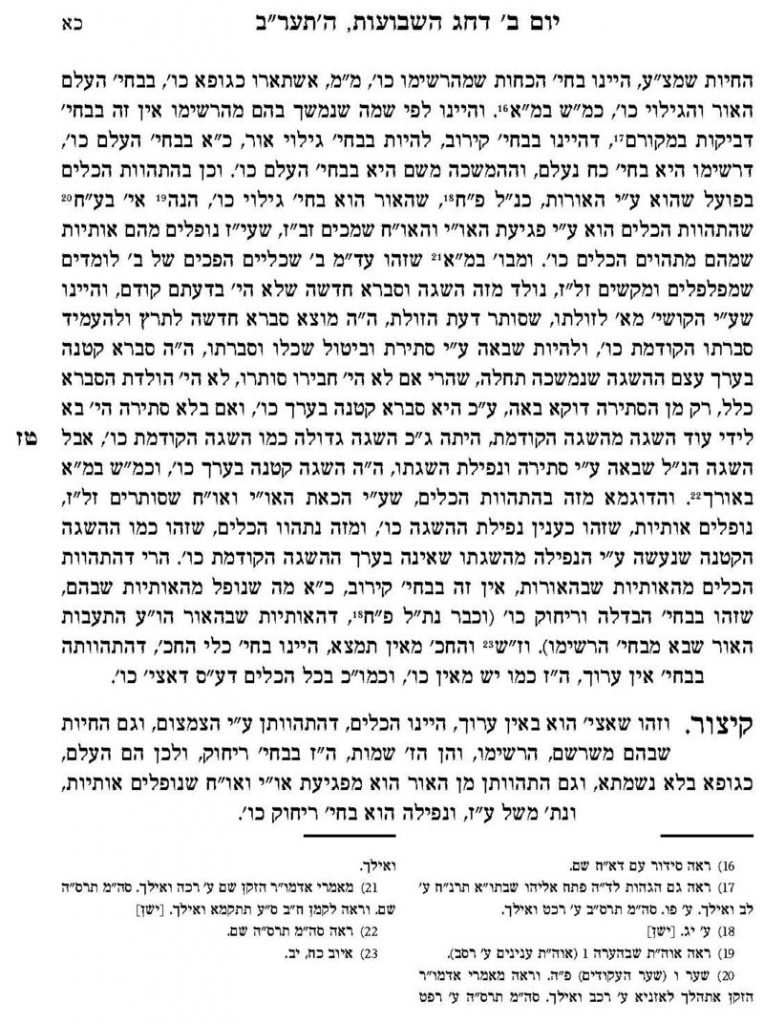 The REBBE RASHAB in his historic discourse – Ayin Beis – documents the theory behind the HIGGS BOSON 100 years before it’s potential discovery in July 2012. *

As chapter 9 discusses the containers of Atzilus and their relationship with their source (the reshimu), the readings from Etz Chaim bring to mind possible parallels to the recent news about the possible identification or confirmation of the Higgs Boson.

I will attempt to draw parallels to what Ayin Beis may be describing one hundred years before it’s possible confirmation in the scientific community not long after Shavuos this year.

The question centers on the discussion of how the containers (Kalim) came into existence. The summary in Chapter 9 states that, “the containers have a distant and concealed relationship with their source (the reshimu)”. “This distance is also understood from the Etz Chaim, which explains that the containers came into being through the clash between the “direct energy” (ohr yoshor) and the “refracted energy” (ohr chozer)”.

It is this process of the clash of direct and refracted energies which I believe parallels the process of finding the Higgs Boson in the Large Hadron Collider at CERN in Switzerland. I will quote from some recent articles about the process involved and try to emphasize the connection and possible proof of the creation of containers i.e. the Higgs Boson.

The Higgs Boson is purported to be the particle that creates or gives mass to other particles, which I will call ‘containers’. A sub-atomic particle has mass and energy and they are the fundamental building blocs of quantum mechanics and the world of our existence in the macro or larger sense.

The first article I will reference is from Bloomberg News: “Particle Discovery Brings Scientists Close to Understanding Mass” by Thomas Muller and Jason Cole – July 4, 2012. (1)

In referring to the Higgs particle, Pauline Gagnon a researcher in Geneva is quoted as saying, “There is no doubt it comes from a different signal, different channels, with different experiments. Particle physics is the study of the elemental building blocks that make up matter. These particles with names such as quark, fermion, lepton, and boson, can’t be subdivided. They exist and interact within several unseen “fields” that permeate the universe”. (1)

The field that generates mass for objects was named by U.K. physicist Peter Higgs who was one of the first scientists to outline a working theory on how elemental particles achieve mass.

“A more exotic version of the Higgs particle could help scientists understand the 96% of the universe that remains obscure, since observable matter only represents 4% of the total”. [IBID].

The mechanics of the process done with the New CERN Hadron collider go something like this as I paraphrase from the articles:

“The new particle is produced in collisions of protons that occur at a rate of over a hundred million collisions per second. Before the protons collide, they are accelerated to an energy over 3,000 times larger than the energy contained in their own masses while they go around a 27-kilometer circular tunnel. Enormously strong superconducting magnets cooled by the world’s largest source of liquid helium, keep the energized particles in their tracks. (2) – ‘Why the Higgs Boson Matters’ – NYTimes.com – by Steven Weinberg – July 13, 2012.

This clash of energized protons in the Large Hadron Collider parallels the process noted above. The result is the Higgs Boson, or in my opinion, the creation of the containers which have mass and contain energy from OR which has shape as we are learning in the 3rd and 4th discourse of Ayin Beis.

In chapter 9, Rabbi Jacobson talks about a clash of energies, which forms containers. Arguably the refracted energy is the opposing energy of the 2nd proton particle clashing with the 1st proton in the opposite direction. The result is the Higgs Boson, which comes from the field, which creates the containers which gives mass to all other particles or containers. The analogy Rabbi Jacobson gives is to the creation of a new idea, which results from the clash, or contradiction of two ideas resulting in a new idea, which is smaller in scope. The Higgs Boson is much smaller in energy and mass and exists in the Collider for a millionth of a second or less. The other parallel is that the reshimu or letters are the product of the clash of opposing energies, (OR before the Tzimtzum). The reshimu as we learn in subsequent chapters is the root of all containers.

Could the Higgs Boson be an example of the reshimu? Let me know what you think.

Following this, I came across an article in the Boston Sunday Globe, Ideas Section, July 22, 2012: The Nightmare Scenario – What if the Higgs boson isn’t a beginning for science but an end? – by James Owen Weatherall as reported by Dan Zeder of the Globe Staff. (The author is an assistant professor of logic and philosophy of science at the University of California, Irvine). (3)

The article talks about the nightmare scenario, which is, “if in fact the Higgs boson has been found, the limits of science discovery may be at their end logically”. “If the largest and most powerful particle accelerator humans have ever managed to build can’t show us anything beyond the Higgs boson, it may be a very un-welcome sign that we’ve hit the limits of what we can learn”. “The cost of building the Large Hadron Collider was about $9 billion just to be able to collide two protons with enough energy to produce the Higgs boson…..It appears the key issue is that while the Standard model of Physics is being explained it is still flawed in that there is no answer for the 4th force, gravitation”. [IBID]

“Gravitation is mysteriously different from the other 3 forces. It is much weaker about 10 to the 32nd power times weaker than the next highest force”. “Other problems arise as well in that the universe is not only expanding but accelerating – a process that requires a huge, unexplained source of energy now called dark energy. The standard model only accounts for 4% of the known mass-energy of the universe”. “ To find something really new, we would need to go much, much deeper than we have so far – all the way to what’s called the Planck scale”. To explore matter at that level requires energies 10 quadrillion times larger than what the Large Hadron Collider can produce”….The Collider is 17 miles in circumference and took a decade to build”….. A collider to probe the Planck scale would need to be, literally the size of an entire galaxy”. [IBID]

The article concludes with this statement: “We are faced with a struggle between the questions we want to answer and the limitations of our abilities – and at some point, perhaps soon, our limitations will win the day”. [IBID]

In my opinion what this could tell us is the energies we are talking about are from EIN SOF and the fact we cannot attain these levels of knowledge, confirms the divine roadmap of existence, which is Ayin Beis. What an exciting revelation for the world which could bring the coming of Moshiach!