To appreciate the role of the Keter/Will interface (between the Source and existence) we must first understand the structure of existence. The building blocks of the cosmic order — all that exists — is comprised of ohros and keilim, energies (lights) and containers. We can relate to this by observing the human being, whose faculties consist of particular forces manifesting in specific organs — energy and container each precisely tailored to the other (i.e. the mind is in the brain, the power of sight in the eyes. The effect of one faculty on another is only a diminished reflection of the faculty’s energy, not the energy itself which has it particular resting place). This is called ohr pnimi — an internalized and integrated energy. 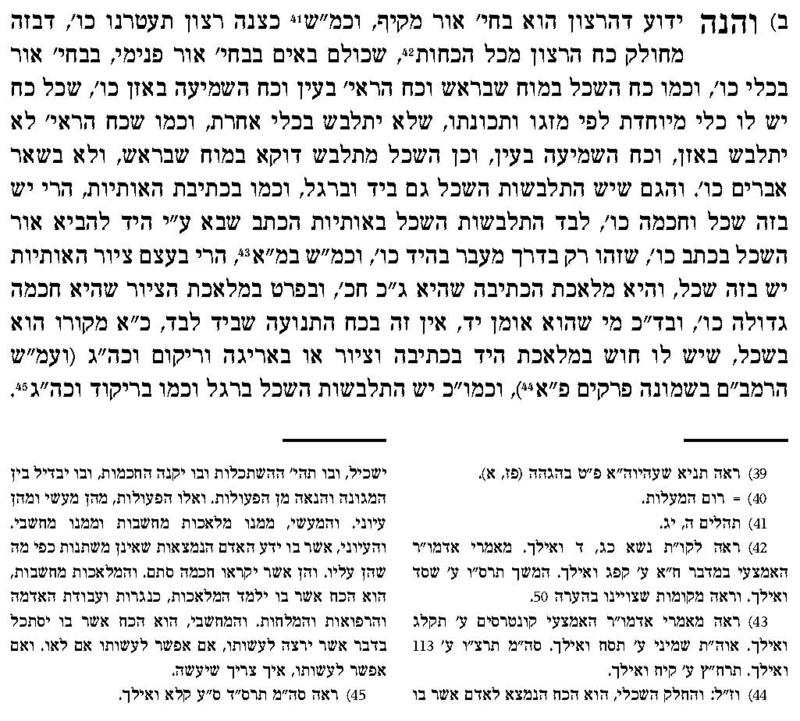 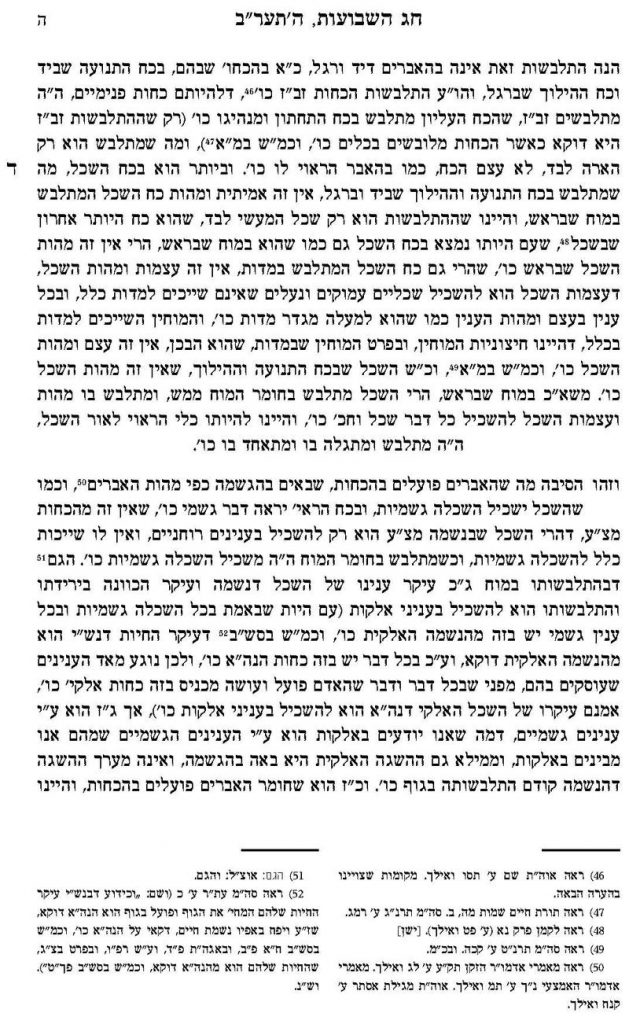 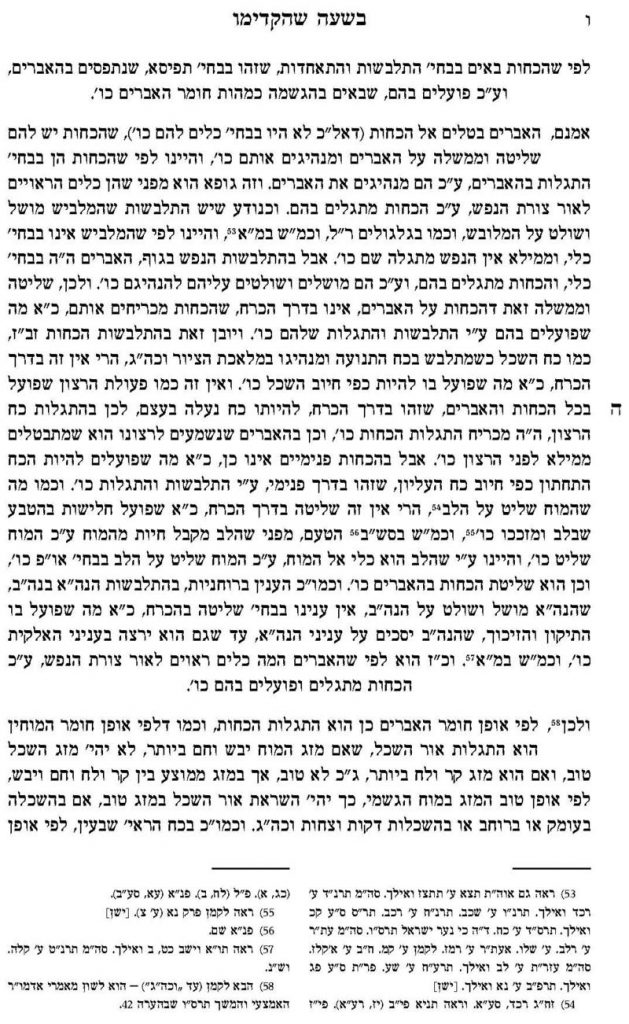 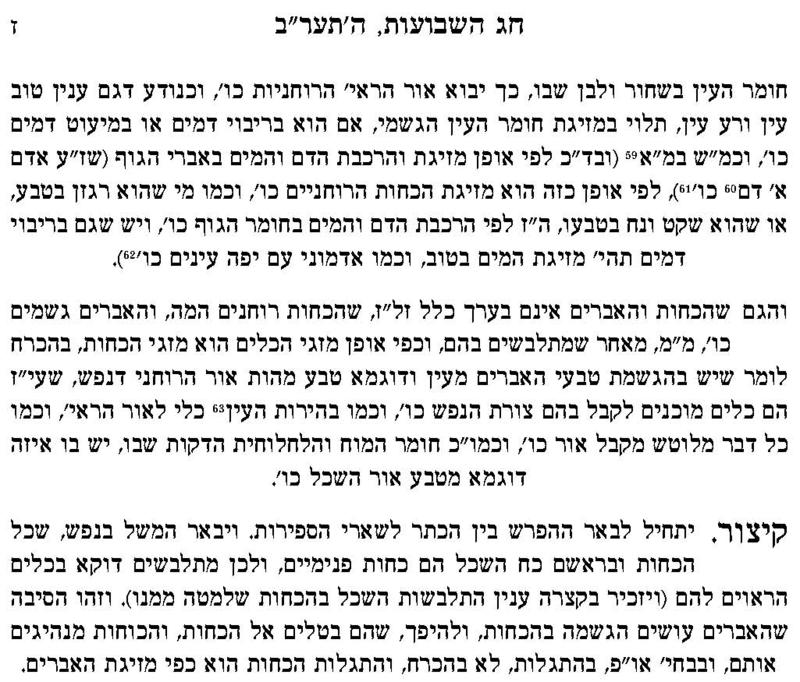 (The World of Emanation) (lit. “emanation”); in Kabbalistic terminology, the highest of the four spiritual worlds, the realm of spiritual existence which, although encompassing attributes which have a specific definition, is in a state of infinity and at one with the Infinite Divine Light.

(Benevolence; Love) (lit. kindness, grace) used to refer to the Divine attribute (sefira) which parallels the abovementioned human qualities and thus is associated with the dispersion of G-dly light and energy to lower levels of existence.

(lit. the magnificent); period in Jewish history from 500 to 1038 C.E marked by intense scholarship at the Babylonian academies by scholars who studied and interpreted the Talmud. During this period, many decrees were passed, thousands of responsa were sent to Jews throughout the civilized world of the time, and many important books were compiled.

deeds of kindness, extending charity and kindness by word and deed.

(discipline, structure) (lit. might, strength) the second of the seven Divine middot, or attributes, associated with the holding back of Divine revelation and restricting the dispersion of Divine light to lower levels of existence.

(lit. crown) the sublime level of divine emanation which transcends the set of the ten Sefirot; in man’s spiritual personality it is the source of the corresponding “superconscious” faculties of pleasure and will.

a source of energy, ability or force as it exists in a potential state.

(dignity) (lit. kingship, sovereignty,) the last of the ten Divine sefirot and their corresponding mortal middot; acts as a transitionary link to a lower world.

(Mida sing.): (a) Attributes of character; spiritual emotions (e.g., the love or awe of G-d); mental states. (b) The seven lower sefirot, the Divine emotive attributes. (c) Tractate of the Talmud that concerns itself with the structure of the Holy Temple.

(a) the classical collection of the Sages’ homiletic teachings on the Torah, on the non-literal level of derush; (b) any one such teaching.

a compilation of Midrashic interpretations of the Pentateuch and certain other Biblical books, composed in the fourth century.

(lit. light) the metaphor used for Divine energy, the manifestation, expression and transmission of G-dliness. Ohr reflects and is consciously connected to its source, the luminance known as Maor:

(lit. worlds) Spiritual Realms in the cosmic order that distinguish one stage from another in the gradation from the ‘higher’ to the ‘lower’ manifestations. In the ‘higher’ worlds’ the Divine energy (Ohr) is more conscious, than the definitions and containers (Keilim). As the ‘worlds’ gradate ‘lower’ the containers become more dominant than the energy. Each ‘world’ contains ten spheres (Sefirot), each of which is composed of Ohr and Keli.

(Will): will, desire; generally speaking, Ratzon refers to the lower dimension of Keter:

(lit. order of the chain/sequence) the cosmic order and chain. The evolutionary process of all the worlds, beginning after the tzimzum.

(lit. teaching) (a) The Five Books of Moses (The Bible); (b) the overall body of Jewish religious teachings encompassing the whole body of Jewish law, practice and tradition.

a wholly righteous person. In the context of Chabad literature, one who has conquered his animal impulses and is filled entirely with love and reverence for G-d: Machtir Et Hatzadik, surrounds the righteous.

EITZ CHAIM R. Yitzhak Luria (Arizal) (1534-1572). The Arizal, sometimes referred to as Ari HaKodesh, is said to have received his teachings from the Prophet Elijah. He is universally accepted as the prime authority on the Kaballah. Available in English as The Tree of Life. Translated by Donald Wilder Menzi and Zwe Padeh (Jason Aronson, 1999)

MISHNAH The first compilation of the oral law, authored by Rabbi Yehudah HaNasi (approx. 200 C.E.); the germinal statements of law elucidated by the Gemara, together with which they constitute the Talmud; also, a single statement of law from this work.

MIDRASH RABBAH a compilation of Midrashic interpretations of the Pentateuch and certain other Biblical books, composed in the fourth century.

ZOHAR; Book of Splendor R. Shimon bar Yochai (Rashbi) (80-160). Major Kabbalistic text. Illuminates the inner workings of existence. NOTE: The manuscripts of the Zohar were found and subsequently published in the 12-13 centuries in the cities of Crimuna and Montoba.

To understand the role of the Keter interface (introduced in chapter 1), the next 45 chapters (2-46. pages 3-80) lay out in elaborate detail the map of the cosmic structure, the building blocks of existence, which consist of the permeating energy that manifests in containers. Only after the long discussion about this structure does Ayin Beis return, in chapter 46, to understand the function of Keter.

Chapters 46 and on explain the different aspects and dimension of Keter, and then in chapter 126 (at the end of the 31st discourse of the series, which concludes the first break, which spanned from Shavuot 5662 to Parshat Vayigash 5673) he returns to answer and address the questions he asked in chapter 1. Then, following an interlude of around 5 months (from Vayigash to Shavuot 5673), the series continues discussing the three crowns, dissection and probing ever deeper into the heart of the Keter interface.

Often we think that we are essentially removed from others and that no one really “gets us”. If only they knew what our situation was and the troubles we are going through then they would empathize with us and understand us!

However bear this in mind. If G-d who has a truly immeasurable gap separating Him and all other entities nevertheless can connect and bridge the schism with His divine will, then surely if we are only willing and ready we can bridge the finite gaps that exist between us and the person sitting next to us. After all we are all made in the Divine image and by being aware of how deeply we are all connected, the superficial dividers between us will fade into oblivion and insignificance.

1. Comparisons: The comparison of the different statements of our sages about “crowns” demonstrates the classic Torah method of appreciating a concept by contrasting it with other descriptions and contexts of a similar concept. In this case, the number of “crowns” and the different ways they are formed and presented allow us to better understand their metaphorical role.

2. Fusing the outer and inner dimensions of Torah: The sages’ descriptions of the “crowns” ground the mystical explanations that follow; and vice versa: the mystical dimension allows us to appreciate As such, we have here an excellent example of the symbiosis of the “body” and “soul” of Torah: The spiritual significance of the crown (Keter), as the Divine will that interfaces between the Divine Essence and existence, illuminates for us the true significance of the “crowns” given to the Jewish people at Sinai. And the difference between one crown and the next will be understood after the in-depth and elaborate discussion in the later discourses of the series about the different dimensions of the “Keter” interface.

3. Thoroughness: The Rebbe Rashab in general, but specifically in Ayin Beis, leaves no stone unturned in the process of developing the series’ respective themes. He addresses every nuance and qualifies every exception. We see this in how he begins by explaining Keter citing its three meanings in the Pardes. He dissects each of the three, especially the first one, laying the ground and framework for the ensuing discussion of the different elements of Keter as the interface between the divine and existence.

3. Chassidus as applied and demystified Kabbalah: The concept of Keter in Kabbalah remains somewhat cryptic and obscure. For the contemporary individual, it surely is difficult to apply Keter to our lives. In this chapter we see how Chassidus, as elucidated by the Rebbe Rashab, takes a mystical Kabbalsitic concept, namely Keter, and after citing its Kabbalistic meaning, explains in palatable terms its relevance to existence and to our lives. Namely, that Keter is the will and desire of an entity to create and connect with something “other” than (“outside” of) its own essence. We can then all identify the “Keter” within our own psyches and unconscious as the bridge between the essential “you” and everything around you, that is your will and desire, without which your core essence remains detached from others and from experiences outside (or even within) yourself.

A person naturally resides in a state of solitude. Not emotional lonesomeness but rather a sort of existential aloofness. The ability to desire and want breaks this façade of indifference and allows us to connect with stimuli outside of us.

Imagine an individual stripped of their very capacity to desire. What would they do? They would literally sit in a room till they expire. Without our will we remain encapsulated in a box of abstraction without even being able to connect with life itself. That’s simply on a practical level.

The reason being, that the cognitive and emotional abilities stem from the soul. But the soul is a spiritual entity that gravitates towards less definition and more abstraction. Hence without will, which is the ability to extend outwards and interface with other entities, there would be no possibility of intellect or emotion since the soul would be lacking the ability to move beyond its own inner sanctum and thus would not even propel itself outward into intellect and emotion.

Analyzing earthly realities is of paramount importance to us because corporeal entities are derivatives of the spiritual realities that fathered them. It follows then that by examining and dissecting tangible phenomena in our world (the derivative) we can glean much knowledge and awareness of the divine (the source).

As a result the level of desire is known as the cosmic mediator since it is the divine ability to extend from a more ethereal lofty level to a more structured defined one.

To be specific the divine desire is known as Keter or crown. This is because throughout all the various planes of existence there is a transcendent point that encapsulates all the dynamics and levels that evolve in that world. It encompasses and includes within it all the subtlety and intricacy that will develop “later”. It is the crown in the sense that it is the first level and “hovers” over the world much like a crown is the highest and hovers over the head of the king. This point is defined as the Divine Will for that world.

To place these concepts into context within the overall scheme of existence we would say that each of the four worlds has general abstract level called its crown that incorporates everything within that world. Beyond this the level of Adam Kadmon also has a super general point that includes all of the four worlds together as one. Beyond this before the Tzimtzum there is a general transcendent level which is the divine will for all of existence on all levels that contains everything that will evolve.

When we say that keser includes everything that will evolve later does it mean it includes within itself each level specifically? Or does it mean it encompasses all levels generally in that they exist potentially in the point of keser?

To concretize the question consider the following analogy:

Is it like a seed that includes potentially generally all the elements of the tree that will grow later? Or is it like an architectural blueprint where every detail has been thought of individually just that it hasn’t been revealed or attained independent existence?