A second example for the emanation of the ten revealed sefirot from their root in the ten hidden sefirot.

Details of an intellectual concept is a second example (similar to the example of the letters of a word) to understand the relationship between the ten revealed sefirot to their root in the pre-tzimtzum ten hidden sefirot: Every idea is comprised of details, and it must be transmitted from teacher to student piecemeal, detail by detail. The teacher comprehends the entire concept and is able to see the big picture in every detail. However the student comprehends only the specific detail, not the entire picture and not how this detail is part of the big concept. Even if he understand the bigger picture, it is limited and defined compared to the pristine perspective of the teacher.

This example can explain the ten sefirot: The Source — the Divine Emanator — has an inner purpose which is fulfilled through the emanation of Atzilus and its ten sefirot. [Overall, the purpose is to bestow goodness on the creatures, and they recognize His majesty and cling to Him, or that the divine powers should be actualized]. The hidden sefirot (before the tzimtzum) are completely encompassed in, and are simply an expression of, this inner purpose; all the sefirot sense, like the idea in the mind of the teahcer, only the utterly formless divine pre-tzimtzum energy. By contrast, when a single sefirah emerges after the tzimtzum, it only senses, like the student, the energy within this detail, within this specific sefirah. The detailed sefirah does indeed reflect its part of the entire concept, and it even reveals to us the higher purpose of the sefirot in the root of the energies (which is to allow Him to be known; ohr pnimi), but in a diminished form compared to the revelation of the hidden sefirot of energy prior to the tzimtzum.

The first example (of the letter beis in the word boruch) teaches us that the detailed letter reflects the diminished energy in one specific sefirah compared to its source (the entire word). While the second example demonstrates the diminished awareness of the higher purpose of the sefirot: 1) that He be known, 2) that the world should understand and feel the divine, 3) the interconnectivity of the sefirot reflect the all-complete and all-perfect divine. 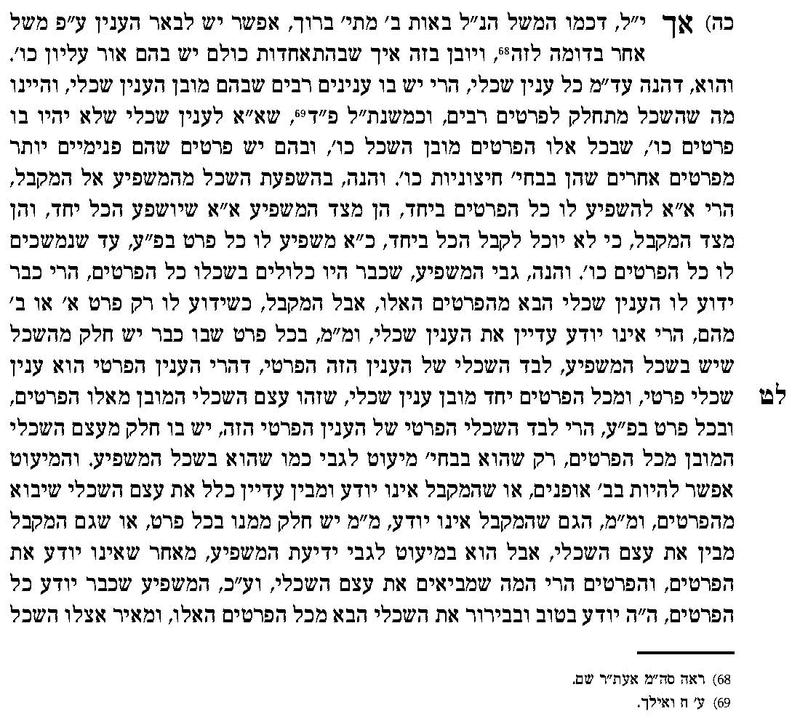 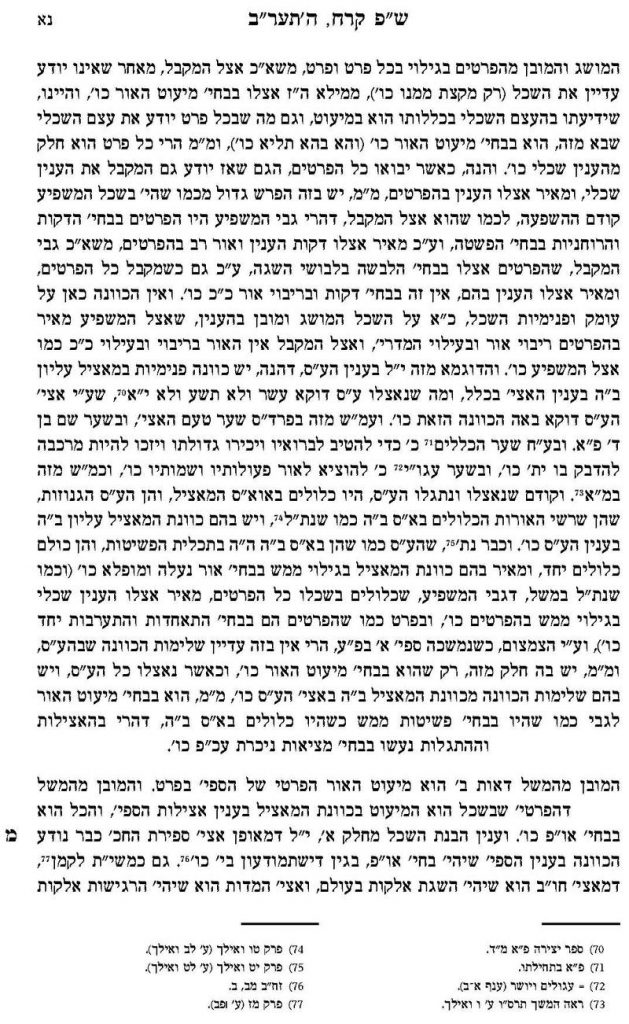 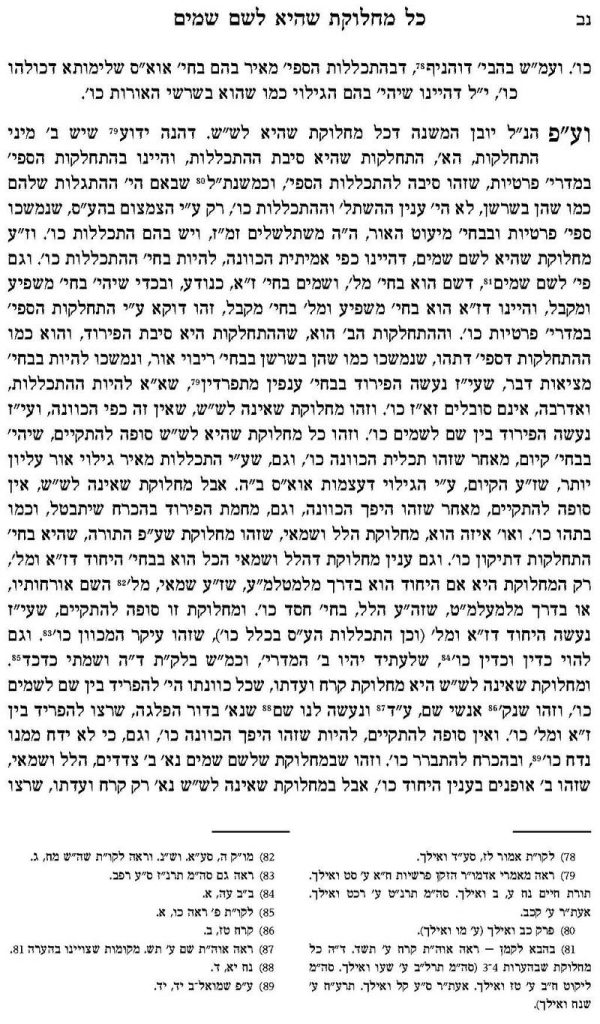 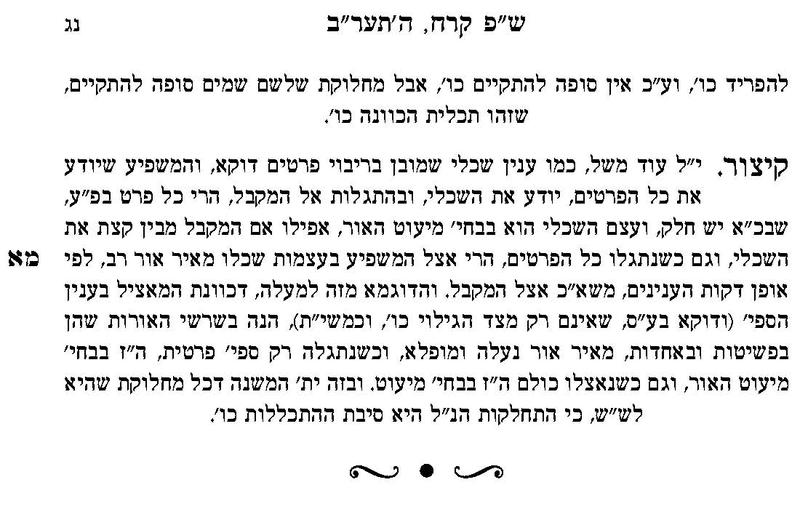 Whereas in the first example (letters of a word) the letters are mere containers, which do not carry the energy of the idea expressed by the word, this second example demonstrates that energy has two levels: 1) the way it is in the source (the teacher), where all the details are permeated with the overall concept. 2) the way it is in existence (the student), where the details emerge and only reflect the energy within that particular sefirah, and do not comprehend the entire picture in its full intensity.

The question is, why do we need the first example after we have the second one? At the end of the chapter he says that the first example teaches us that the detailed letter (beis) reflects the diminished energy in one specific sefirah compared to its source (the entire word). While the second example demonstrates the diminished awareness of the higher purpose of the sefirot. But what remains unclear is that both these insights are reflected in the second example, as well as in the first one. So why the need for both examples?

Or the other way around: Example one emphasizes how the energy reaches and is integrated and tailored to a specific entity (chochma), like the idea within a word is spoonfed to a child with one letter. The focus is on the individuality of the sefirah. And the second example demonstrates how the student can also relate to the general purpose of the sefirot, as they stand in their root. The focus is on the overall divine purpose of existence.